Speaking out about democracy in ‘the golden age of surveillance’

Opinion: ‘Not content with introducing draconian legislation to control NGOs and the media President Putin wants to control the internet as well’ 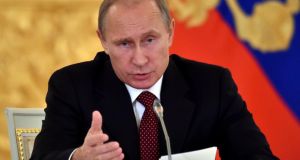 ‘In July this year, the Russian government posted a tender on the government’s procurement website offering a reward of $114,000 to anyone who could crack Tor’s communications system and help them to identify Tor users.’ Above, Russian President Vladimir Putin. Photograph: Kirill Kydryavtsev/AP Photo

In his opening remarks to the Front Line Defenders annual lecture, digital security guru Bruce Schneier described the present moment as “the golden age of surveillance”. If our government asked us to carry a surveillance device which would enable the security services to follow all our movements we would be outraged, yet every morning we pick up our mobile phones which do just that. If we were asked to register all our friends and interests with the police, we would refuse point blank, yet we do this every day when we log on to Facebook.

“The NSA has effectively turned the internet into a giant surveillance platform which has spread into all areas of communications managed through a public-private surveillance partnership between government and major corporations. In effect surveillance is the business of the internet,” Schneier said.

A case in point is Bahrain, a country where the government has essentially created a police state, by restricting political activity, banning peaceful demonstrations and shutting down independent media – including digital.

The government of Bahrain, among other things uses FinFisher software to install spyware on the computers and smartphones of targeted activists, controlling their web cameras, logging keystrokes and recording phone and Skype calls. They even used this software to spy on the members of the Bahrain Independent Commission of Inquiry, a body appointed by the king to inquire into human rights abuses committed during the brutal security clampdown in 2011. As a result, many of my friends and colleagues remain in prison, serving long sentences after grossly unfair trials, where the evidence against them was acquired online.

I launched Bahrainonline.org in 1998 because there was no other space in which people could speak openly about the need for greater democracy. All the mainstream media were either controlled by the government or practised self-censorship to avoid getting into trouble. I was first arrested in 2010, held for six months and tortured because of my criticism of the government. Three weeks after my release I was warned a new warrant for my arrest had been issued. I went into hiding and stayed there for the next two years.

Why? Because not content with introducing draconian legislation to control NGOs and the media, Russian president Vladimir Putin now wants to control the internet. In September, Russia introduced a Bill to force internet providers to store their Russian users’ data inside the country where it would pose a real risk to the security of human rights defenders.

In Egypt, the government recently invited tenders “to provide and operate software that monitors internet activities”. Under the “Social Networks Security Hazard Monitoring Operation”, the government is attempting to develop a mass surveillance system, to monitor all users’ digital activity. In tandem with this, the Egyptian government has fixed a deadline of November 10th for all NGOs to register under a new law which would give the government and security agencies veto power over all NGO activity in Egypt. At the same time, we are seeing a wave of arrests of people administering websites or pages critical of the government.

China, while maintaining tight control of the internet inside its borders, routinely targets Chinese democracy activists working in exile.They have to contend with routine cyberhacking, including persistent denial-of-service attacks and implanting of malicious code on their websites.

Presenting the Global Online Freedom Bill to the House of Representatives, US congressman Chris Smith said, “In the past five or six years, the internet has been transformed from a freedom plaza to a dictator’s best friend. Every day we learn of more democratic activists being arrested through the use of a growing array of internet censorship and surveillance tools, abused by the governments of China, Belarus, Egypt, Syria and many other countries around the world.

As internet and technology gurus from all over the globe assemble in Dublin today for the 2014 Web Summit, they need to address the fact that the internet is secure for everyone or it is secure for no one.

Ali Abdulemam, founder of Bahrainonline.org is in Dublin as the guest of frontlinedefenders.org. He is speaking at the Dublin Web Summit today on the subject of Technology in Conflict