South Antrim: All seats taken as two elected below quota 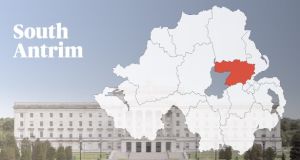 It’s all over in South Antrim as the UUP’s Paul Michael has been eliminated at the seventh stage of the count, meaning his party colleague Steve Aiken and the DUP’s Trevor Clarke are both elected below quota.

That means the DUP retains three seats in the constituency, with Alliance, Sinn Féin and the UUP taking one each - the same make-up as after the 2011 election in terms of party representation.

The UUP’s Adrian Cochrane-Watson was the only outgoing MLA to lose his seat, but he’s replaced at Stormont by former Royal Navy submariner Steve Aiken, who pledged to “work hard for all the people of the constituency, regardless of race, religion, gender or background”.

Stage six of the count in South Antrim saw Alliance leader David Ford and Sinn Féin’s Declan Kearney both pass the quota thanks to transfers from the SDLP’s Roisin Lynch.

A delighted Mr Kearney, who replaced outgoing MLA Mitchel McLaughlin as his party’s candidate, said it was “essential” to have Sinn Féin representation in the constituency.

Mr Ford, who had looked to be struggling after the first preference stage, said he was never concerned that he might lose his seat.

“It clearly shows that Alliance has not gone away - as some people were suggesting earlier in the day,” he said.

Ms Lynch has been eliminated in the fifth stage of the South Antrim count in the Northern Ireland Assembly election.

Ms Lynch, a local councillor in Antrim and Newtownabbey, was eliminated despite attracting a strong first preference vote of 3,366.

The DUP’s Pam Cameron was re-elected in the constituency at the fifth stage of the count.

A delighted Ms Cameron described the last five years as “a steep learning curve” and said she’s now looking forward to a second term at Stormont.

The redistribution of the transfers of the excluded Adrian Cochrane-Watson (UUP) is still ongoing.

The only other candidate elected earlier in the constituency was the DUP’s Paul Girvan, the poll-topper.

Mr Cochrane-Watson, who was co-opted onto the Assembly following Danny Kinahan’s success at the last Westminster election, had left the count centre before the result was officially declared.

No one was elected at the fourth stage of the count.

TUV candidate Richard Cairns was eliminated after the third count and his transfers redistributed.

Mr Girvan had secured enough transfers to be elected at the second stage of the count in Newtownabbey.

Mr Girvan had also topped the poll in South Antrim in the 2011 election.

Ukip’s Robert Hill and Helen Farley of the Green Party were both eliminated in the second stage. Their transfers were counted in the third stage of the process.

With no one elected at the first stage of the count, David McMaster (Independent) and Mark Young (Conservatives) were both eliminated.

The count is taking place at the Valley Leisure Centre in Newtownabbey.