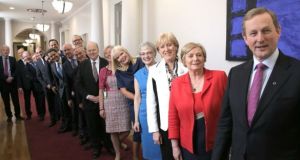 Taoiseach Enda Kenny has announced the makeup of the new Cabinet. Singificant appointments include Simon Harris to Health, Leo Varadkar to Social Protection and Shane Ross to Transport. Mr Ross was among three Independent TDs to receive ministerial portfolios. The posts are as follows:

Minister of State at Departments of the Taoiseach and Defence with Special Responsibility for Defence: Paul Kehoe