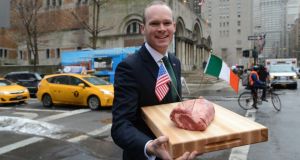 Minister for Agriculture Simon Coveney expects other Irish meat producers to follow Larry Goodman’s ABP quickly into the US after the lifting of a 17-year ban on Irish beef.

Mr Coveney was in New York on a three-day trade visit to the US to promote Irish beef as ABP and Northern Ireland producer Foyle Meats became the first companies to have Irish meat plants approved to sell beef into the American market.

The Minister pointed out that ABP’s €15 million annual deal with American food distributor Sysco, signed yesterday, would bring Irish beef exports this year close to the 20,000 tonnes estimate he has targeted for sales.

The ban was lifted at the start of this year.

“It is a good start today,” he said. “Our biggest beef producers and one of the biggest food producers in the US are signing a deal. ABP tell me they have other exciting opportunities that they are pursuing.”

Paul Finnerty, chief executive of ABP, said that the Minister’s earlier estimate that the US market could be worth €100 million a year to Irish beef exporters wasn’t “unreasonable” given that this represented only 5 per cent of annual Irish beef exports.

Irish food producers have an advantage becoming the first European country to enter the market in 17 years.

“I don’t see any other European countries moving into the US for at least 12 months, which gives us a big head start,” said Mr Coveney.

Bord Bia, the food marketing agency, is promoting Irish beef as premium steaks with healthy and nutritional benefits, as it comes from cows fed on grass, in contrast to the mass-produced, US grain-fed cows.

Mr Coveney expects the US authorities to sign off on the importation of Irish “ground” beef over the coming weeks, which will open the door for the sale of Irish minced beef into the growing premium burger market.

Priced at a premium, Bord Bia believes Irish beef will enjoy a higher price above that again.

“It is a costly product to produce and if our farmers are going to get a margin that is going to sustain them, we have got to be selling into niche, quality, high-priced markets,” said Eddie Downey, president of the Irish Farmers Association.

Mr Coveney said he sees an opportunity for Irish lamb in the US once there is the same recognition of international veterinary standards on the sheep disease scrapie as there has been on the cow disease BSE.