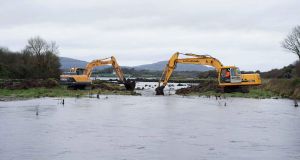 Projects to ease the flooding situation along the river Shannon may require the Government to breach EU habitats directives on wildlife, a Government Minister has said.

Taoiseach Enda Kenny will convene a meeting next Tuesday of all the State agencies with responsibility for the Shannon, along its length.

The meeting in Government Buildings will seek to identify temporary solutions for the 66 towns and communities along the river which remain vulnerable to flooding during extreme weather incidents.

Some are likely to have an impact on EU directives that protect bird and fish life along the river and its catchment areas. Protected species include salmon, sea lamprey, corncrakes and kingfishers.

“Some of the suggestions will breach the EU directives,” said Minister of State for the OPW Simon Harris.

“We have a humanitarian crisis in some areas and in those instances protecting those communities may trump any EU directive that is in force.

“We need to ensure the public good is to the absolute fore in ensuring any necessary works can be carried out. Yes, we have obligations under directives and that’s important but the most important thing is people, their homes and their livelihoods.”

The Government has announced a budget of €430million for capital projects over the next five years, a sum equal to the provision made in the previous 20 years.

The agencies involved are Inland Fisheries, Waterways Ireland, Bord na Mona, the National Park and Wildlife Service, the ESB and all the local authorities.

The Government said this week resources would not be an issue in terms of responding to the current crisis. Of the €23 million allotted so far to three relief schemes, less than half has been drawn down.

The Government has claimed that despite the extensive flooding, defences and responses have worked much better than in 2009. In Athlone in 2009, 140 houses were flooded while in the current crisis, only three have been flooded.

One solution suggested by the Taoiseach this week was for families in isolated homes to have their properties moved to higher ground.

“The question you have to look at, is if it is possible to do minor drainage and minor relief works around some houses that are currently surrounded. If it is not, is it a question of a relocation policy, perhaps to higher ground?” he said.

More immediately, the safety of the country’s roads will be under threat from “potentially lethal” black ice in coming days as temperatures drop on flooded ground, Met Éireann said.

Preliminary figures from Met Éireann indicated that December was the warmest and wettest on record.

Temperatures were at least 3 degrees above normal almost everywhere and rainfall amounts were three times the December average.