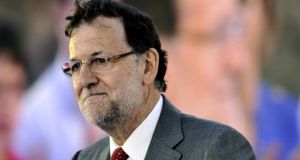 The issue of sexism is dominating the run-in to Spain’s European elections after the country’s conservative candidate said he had underperformed in a televised debate because his rival was a woman.

Miguel Arias Cañete, the candidate for the governing Popular Party (PP), was widely criticised for his performance in last Thursday’s debate against Socialist candidate Elena Valenciano, in which he read many of his arguments from notes.

In defending his debating style on a TV current affairs show hours after the debate, Mr Cañete said he had been “afraid of being myself” while discussing political issues with Ms Valenciano, before elaborating.

“A debate between a man and a woman is very complicated, because if you abuse your intellectual superiority, or whatever, you come across as a male chauvinist who is cornering a defenceless woman.”

The remarks caused a storm on social networks and the Socialists have seized on them as proof the governing PP, which is narrowly ahead in polls, is a party of old-fashioned chauvinists who are ideologically opposed to gender equality.

“Cañete said he let me win the debate because I was a – inferior! – woman,” tweeted Ms Valenciano afterwards.

Ms Valenciano and others in the party have pointed in particular to the PP government’s abortion reform, which would restrict terminations to cases of rape and if the mother’s health is at risk, as evidence it wants to limit women’s freedom.

“There are lots of people on the political right who think that men are superior to women,” said Socialist leader Alfredo Pérez Rubalcaba during a campaign event on Saturday.

The PP has closed ranks, with none of its senior politicians criticising Mr Cañete, including Mr Rajoy, who at the weekend called him “far and away the best candidate”.