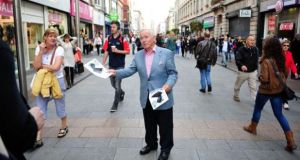 Senator Fergal Quinn of Democracy Matters in Dublin’s Henry Street on Saturday campaigning for a No vote in the Seanad referendum. Photograph: Aidan Crawley

The Government is on course to win the referendum to scrap the Seanad on grounds that abolition will save money, according to a new opinion poll by The Irish Times and Ipsos MRBI.

When undecided voters are excluded, the poll indicates the abolition proposal is backed by 62 per cent, with 38 per cent in favour of retaining the Upper House.

The poll indicates the separate referendum to establish a new Court of Appeal is also on course to be passed on Friday, but there were a few more undecided voters than those saying they would vote for the new court.

The latest poll was carried out last Friday and Saturday among 1,000 adults at 100 sampling points throughout all constituencies.

While the Coalition has come under fire from Seanad supporters for claiming abolition would save €20 million a year, the potential for savings is by far the biggest motivating factor for people who will vote to scrap the chamber.

Among those respondents, 43 per cent said the “main reason” to favour abolition was to save money.

A further 16 per cent said the Seanad didn’t do much or had no power and 14 per cent said two parliamentary chambers were not needed and that other countries had only one.

Among respondents who will vote to retain the Seanad, 54 per cent said they did not want to give the Government more power or believed there should a check on the Government.

Another 20 per cent said their prime motivation in voting to keep the House was because they did not trust or like the Government.

Only 4 per cent of those who will vote to keep the Seanad said they would do so because they didn’t believe the alleged savings. A further 2 per cent said their motivation was that the savings were not significant.

Support for abolition is strongest among older voters: 35 per cent of respondents aged 25-34 said they would vote to scrap the House and 52 per cent aged 65 and older favour abolition.