Same-sex marriage debate will struggle not to be divisive

Analysis: Vote will be a defining moment in the history of the State, writes Harry McGee

The Union of Students in Ireland (USI) launches it's campaign to secure a “yes” vote in the forthcoming marriage equality referendum. Video: Bryan O'Brien 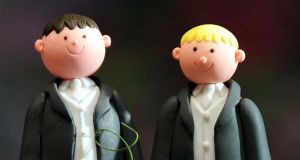 The referendum on same sex marriage will be a defining moment in the history of the State, irrespective of the outcome. In that sense it is most comparable to the divorce referendums of 1986 and 1995, the latter which was passed by a whisker (within a single per cent).

Both of those referendums were divisive and big gaps between the sides closed dramatically in the closing weeks - and indeed days - of the campaign.

Expect it to happen in this campaign. Notably, what distinguished it from recent referendums in which there were dramatic late swings - was that the percentage of don’t knows and undecideds is much smaller.

The battle lines have been already drawn for a four-month campaign ahead of polling in late May. . Within hours of the wording being published, David Quinn of the Iona Institute and Kieran Rose of the Gay and Lesbian Equality Network were accusing each other “muddying the waters” during a live interview on RTE’s Six One.

Expect a lot of that over the next few months during a debate that will struggle (unsuccessfully) not to be divisive.

For the Yes side it is a relatively simple proposition of according exactly the same rights, and equal status, to same sex couples as heterosexual couples have in terms of marriage.

For the No side the argument will be very much framed around children and its assertion that a child should have a constitutional and legal right to a mother and father within a family unit.

There was strong cross-party support for the proposal yesterday with Fianna Fáil and Sinn Féin both backing it strongly. Fianna Fáil will impose a whip for all legislation relating to it, unlike the vote on the abortion legislation in 2013. Any member who votes against the party, or abstains, will be removed form the parliamentary party.

Having spoken to quite a few Fianna Fáil and Fine Gael TDs yesterday, they are quite pessimistic about the outcome and think it may be lost. They make that calculation on people declaring liberal tendencies in public situations but being innately conservative in private and may be persuaded to draw the line at this.

A few said that the nub of the referendum would come down to the proposition that same sex couples should be allowed to adopt (qua a couple as opposed to an individual). Their sense is that for many people, especially middle-aged and older, that will be considered a step too far. The Catholic Church has also issued a statement opposing the amendment but its influence has very much waned over the past 20 years. People will tend to make their own minds up.

There’s a counter argument - and my colleague Fiach Kelly has made this observation - that this is a big issue for the young. They are generally uninterested or alienated from politics. However, this might be the Irish equivalent of the Scottish referendum where the young voted in extraordinarily high numbers for a separate State. There is a sense among some that younger voters will be energised and committed enough to campaign and vote in this referendum - if that turns out to be the case, it could determine the result.