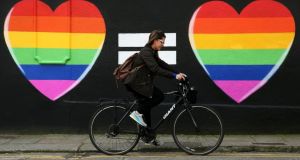 A woman cycles past a marriage equality mural in the Liberties area of Dublin. File photograph: Brian Lawless/PA Wire

Same-sex couples already in civil partnerships will face a reduced fee if they decide to marry, the Government announced on Wednesday, as it agreed the Marriage Bill.

Minister for Justice Frances Fitzgerald sought and was granted approval from the Cabinet to introduce the Bill in the Dáil when it resumes next week.

The legislation will allow for same-sex couples to marry, in accordance with the outcome of the marriage referendum in May.

Ms Fitzgerald said she was confident the first marriages could take place within weeks.

She said: “This Bill implements the strong desire of the Irish people that couples should be able to marry without distinction as to their sex. It will make marriage equality a reality in Ireland.

“In accordance with the priority which the Government is attaching to this matter, the legislative process will begin immediately and I will introduce the Bill into the Dáil next week.”

Ms Fitzgerald will also introduce measures to allow for a reduced marriage fee for those already in civil partnerships.

A fee of €200 must be paid when couples notify a Registrar of their intention to get married in Ireland. However, couples in civil partnerships will now pay €50.

Ms Fitzgerald said civil ceremonies that have taken place outside the country will be recognised in Ireland.

The Bill will now progress through the Dáil and the Seanad next week, where it is likely to receive all-party support.

Some opposition to its passage is expected, given that Senators Rónán Mullen and Jim Walsh, as well as Mattie McGrath TD, all campaigned against the referendum.

Irish Council for Civil Liberties director Mark Kelly welcomed the publication of the Bill and said it was the last step in dismantling the architecture of homophobia.

The Gay and Lesbian Equality Network (GLEN) said this was a day thousands of lesbian and gay couples had waited for.

“Having waited decades, many couples are counting down the weeks to being able to say ‘I do’ to their loved one.

The introduction of the Marriage Bill was delayed due to ongoing legal challenges against the outcome of the May 22nd referendum.

Gerry Walshe, an engineer from Co Clare, and Maurice Lyons, a gardener with an address at Callan, Co Kilkenny, claimed the State misused funding and its resources to promote a “Yes” campaign in respect of the vote.

Both were dismissed by President of the High Court Nicholas Kearns.

On Wednesday, the Supreme Court refused leave to appeal that decision and will now not hear the cases.

In the decision of Mr Walshe’s case, the Supreme Court said the application for leave “should be refused as lacking any factual or evidential basis.

“The claims rely on unsubstantiated assertions which are offered without any, or any adequate, evidence.”