Ryan gambles on European elections as Greens struggle to be relevant 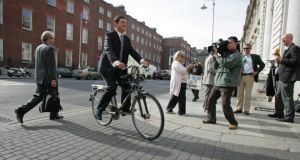 Green Party leader Eamon Ryan in september 2010, when he was minister for communications, energy and natural resources, arriving at Government Buildings for a cabinet meeting. Photograph: Frank Miller

A quip made famous by the late Con Houlihan perfectly, if cruelly, describes the current status of the Green Party.

A reporter with notions had left the Irish Press to become famous in another field. About a year after his departure, a crowd from the Press was drinking in Mulligans pub and the conversation turned to their former colleague.

“What ever became of that fellow?” asked one.

Houlihan’s retort was: “Forgotten but not gone”.

The Green Party is still around although evidence of their presence on the ground is fairly scant.

That the party would be laid low in 2011 is not surprising. It was eviscerated in that February general election, losing all of its six seats. Worse, it failed to garner the 2 per cent of the national vote that was required to get funding from the State. So it had to move from being a professional organisation with a total of 40 staff (when in government) to a voluntary organisation with just enough resources to pay one full-time staff member.

To compound its difficulties, the party had had an awful local election in 2009, losing 13 of its 16 full council seats – and since then its Clare county councillor Brian Meaney has defected to Fianna Fáil.

The Green Party doesn’t face the same existential threat as other small parties because – like has happened in so many EU countries – there will always be a space for a party that campaigns primarily on environmental issues. The yo-yo phenomenon is common. The Greens in Germany, for example, lost all their seats but have bounced back electorally in recent years.

The question is will it recover sufficiently under Eamon Ryan’s leadership to reestablish a foothold in the local and European elections in 2014 and return to have a national presence after the next general election? Or will it take a decade for the party to recover?

In 2011, some of the remaining party activists came together and published a strategic plan to take it from 2012 to 2016. But the difficulties that came with the grim new reality has meant that some of the more ambitious targets were not realistic - raising €100,000 per year; doubling the membership to 2,000 over four years (it’s still possible but a tall order); drafting new policies across all areas; and putting forward a host of articulate next-generation spokespeople.

Holding pattern
The party’s recovery has been slow and halting and, ergo, not always apparent. Their partners in political crime, Fianna Fáil, have picked themselves up, dusted themselves off and moved on but you sense the Greens have been in a holding pattern for two years now.

The party did publish a decent pre-budget submission and has held two major climate change conferences in the Burren and in Dublin. However, it has yet to produce its promised new policies and there are clear gaps in representation in constituencies, including some Dublin constituencies where you would expect them to be strong. Ryan is a one-person political think tank with an impressive grasp of the big issues but there is a sense that the party needs to focus more on simple, local and tangible issues.

The party learned this weakness to its cost once before. Many of its candidates coasted home in the local elections in 1991, including a student, Sadhbh O’Neill, who was on a J1 visa in America and won a seat without canvassing. At the next election it suffered a major reverse and a painful reminder that ground-up grass roots activism was a prerequisite.

Ryan admits that a “huge management task” lies ahead of the Greens but is typically positive about the challenge. “The sense we have out there is that it’s a much more positive environment. Nobody in the party is looking back. We are looking forward.

“When we go canvassing, we see there is a space for the Green Party. It’s not easy. It will require huge voluntary effort, several hundred people working in a common goal. It’s tough and it requires patience and quite a bit of perseverance. That’s what we have.”

With only two full councillors (Malcolm Noonan in Kilkenny and Mark Dearey in Co Louth), Ryan has almost come to personify the party.

The most significant development in recent weeks has been his decision to stand in the EU elections in Dublin next year. He says it was clearly within the rebuilding plans that the party contested the EU elections.

“It’s one of the ways to get the Green Party back. It recognises the strengths we have is that we are part of a European Green movement that has real scale and power.”

Big gamble
It’s a big gamble. And if Ryan succeeds, will he relinquish the seat to stand in the Dáil. And then, in which constituency? Dublin South is being reduced from five to three. He says it’s much too early to make such decisions, though does not rule out contesting Dáil elections.

“First I would have to get elected. If I can achieve that it will do a huge amount to help our party rebuild a base and offices and supports that we need to develop the party.”

More prosaically the party needs to win seats at the local elections. With the abolition of town councils, that means it needs to win full council seats, especially in urban areas.

Ryan reckons that between 50 and 100 candidates will run. Ciarán Cuffe and Dan Boyle will be among them, and there are whispers that Trevor Sargent might. They have a number of bright younger representatives, such as Catherine Martin and Roderick O’Gorman, but others still lack the local recognition that will be necessary.

An exception has been Séamus Sheridan, the Galway-based cheesemonger, who has carved out a strong profile as agriculture spokesman. The recession has backgrounded climate change somewhat as a priority issue but Ryan and the Greens say it is still the most important. Moreover, he argues the party’s messages on issues such as the environment, political corruption, pollution and transport will have a strong resonance with the electorate.

Nuala O’Faolain, a feminist whose happiness was often tethered to men