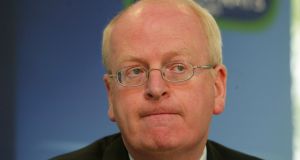 Outgoing senator Ronan Mullen has topped the poll in the Seanad election on the National University of Ireland panel followed in second place by former Progressive Democrat leader and minister for justice Michael McDowell.

Both of them look certain of election but the destination of the third and final seat will be hotly contested.

The final seat appears to be between the two but given that there are 30 candidates in the field it will take some time for the result to become clear.

There was speculation at the count that Ms Higgins should be able to pick up more transfers than Mr Ó Céidigh, given the number of left wing women candidates in the field, but it is not clear whether it will be enough to bridge the gap.

The result is unlikely to become clear until some time today with a large number of counts likely before any of the candidates comes close to the quota.

Speaking following the first count Mr Mullen said: “It is a tremendous honour to have received over 20 per cent of the first preference vote and to be in a strong position to take the first seat. I am immensely grateful to everyone who voted for me.”

He said many of the people who voted for him made the point of telling him they had done so because he was the only candidate on the NUI panel speaking up for the Eighth Amendment and all the positive things it had done in protecting human life and human rights.

Mr Mullen said the second main group of people who voted for him were those who believe there is too much groupthink in public discourse and that many politicians feel they have to say what they perceive to be the politically correct thing.

Meanwhile, David Norris (Ind) has, according to tallies, headed the poll in the three-seat Seanad Trinity Panel.

Speaking at the count in Trinity College on Tuesday night a clearly delighted Mr Norris declared that his unbroken service over the last 30 years would ensure he will be Father of the House in the upcoming Seanad.

Labour’s Ivana Bacik is set to take the second seat while Seán Barrett is struggling to retain his seat after tallies showed he was behind Lynn Ruane (Ind) and Averil Power (Ind).

With 13,591 votes tallied by 9pm a handful of votes separated Ms Ruane, Ms Power and Mr Barrett for the third seat.

Speaking to The Irish Times Mr Barrett said he encountered a very despondent electorate while canvassing.

Large numbers of young graduates had emigrated he said, while many older people were struggling with trying to pay property tax out of their pension.

A total of 16 candidates contested the three-seat panel which has a potential electorate of about 57,000 graduates of the college who may live abroad, but whom must retain Irish citizenship.

Counting got under way in the first count shortly after 9pm and is set to continue to 11pm before adjourning until the morning.

The first count votes for the leading candidates in the NUI constituency were as follows:

A tally from Trinity College election showed the following breakdown: