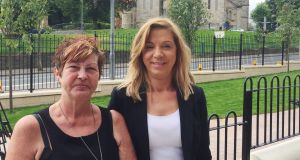 With hope and some trepidation, people on the Crumlin Road in north Belfast celebrated the “symbolic” removal of 270 metres of one of Belfast’s many peace walls yesterday .

During and even since the Troubles, as local community activist Rab McCallum said, violence was “endemic” in this part of north Belfast between the nationalist Ardoyne and the loyalist Twaddell, Woodvale and Shankill areas.

But in recent years nationalist people living along this stretch of the Crumlin Road opposite the landmark Holy Cross Church agreed to a project where the 2.5m high brick wall was demolished in February. It was replaced by a pretty landscaped area and a low wall topped by shiny railings.

“Looking out at a wall for 20 odds years wasn’t very nice. The chapel is beautiful, and the grounds are all beautiful, so it is a lovely place to look at,” said local resident Deirdre Hughes, delighted with the clear view she is now afforded.

The houses are located close to the Ardoyne shops and the Woodvale Road and Twaddell Avenue area, which has been the scene of sectarian trouble during Twelfth of July periods of recent years (although this Twelfth was peaceful).

Ms Hughes knows there is a certain risk to the dismantling of one of the North’s 100 or so interfaces that separate nationalists from loyalists, Catholics from Protestants, but she believed it was a risk worth taking.

There were also shooting incidents in recent years, while during the Troubles hundreds were killed and injured in this part of Belfast. This accounts for why the walls were erected in the first place, going back to the early 1970s.

Ms Hughes noted that the paint-bombings happened before the wall was toppled.

“It is a chance worth taking. If the house can be attacked with the wall up, then what use was it? At least you know who is coming in front of you, you are able to see,” she said.

Her neighbour Jeanie Copeland, who has seven children and 17 grandchildren, agreed. She remembers neighbours being shot and injured during the violence, but also feels it is time to let in more light. “I am happy. The wall was okay, it did its job at the time, but now things have moved on,” she said.

Local man Rab McCallum, a member of Tascit (the Twaddell, Ardoyne and Shankill Communities in Transition group), said nobody can guarantee there will not be attacks in the future. “But we can guarantee people that they won’t be left to fend for themselves. It’s a risk that we have tried to mitigate,” he said.

Looking across at the peace wall not far away at the loyalist Woodvale he said: “What’s good for here is good for the other community as well, and what’s a problem for them is a problem for all of us, so we have to all try and work together to solve those problems.”

Deputy First Minister Martin McGuinness, who attended the official opening of the new gleaming regular wall, has predicted all of the North’s 100 interfaces will be removed by 2023.

These properties belong to the Northern Ireland Housing Executive, which owns 21 recognised peace walls in Northern Ireland. This is the first executive peace wall to be demolished. Clark Bailie, head of the executive, said yesterday was a “momentous occasion” and part of a “series of steps going forward into the future” where people living at the sectarian interfaces would move at a speed dictated by themselves and no one else.

Mr McGuinness said bringing down the wall was “very powerful and symbolic”. “The most encouraging thing isn’t the bricks of an eight-foot wall lying flat on the ground but the fact it was a community-led decision. Real peace is not made by bricks and mortar but by building respect and trust,” he said.