Revenue Commissioners begin the identification of those who failed to pay 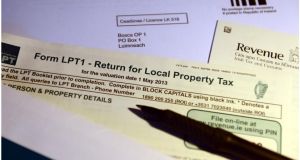 Returns have been filed in respect of 1,539,822 properties, and when about 160,000 properties – for which local authorities or housing associations have responsibility – are included, the figure rises to close to 1.7 million.

The Revenue Commissioners last night confirmed that owners of more than 1.53 million homes filed property tax returns before the deadline of 8pm.

Returns have been filed in respect of 1,539,822 properties, and when about 160,000 properties – for which local authorities or housing associations have responsibility – are included, the figure rises to close to 1.7 million.

The chairwoman of the Revenue Commissioners Josephine Feehily earlier told the Oireachtas Committee on Finance, Public Expenditure and reform that a compliance rate of more than 80 per cent had been secured.

“I have no reason to believe the €250 million estimate won’t be achieved . . . A colossal proportion of the total has come in the last few days, which is probably to be expected given our reaction to deadlines.”

The €250 million target is for half of the year 2013. The deadline was extended from midnight on Tuesday after 8,000 asked to file by phone.

When the Department for Finance announces the end of May Exchequer figures next week, Ms Feehily said she expected that it would include over €100 million of the new tax transferred by Revenue to the Exchequer.

Failure to engage
She outlined the steps that would be taken against eligible people who have failed to engage with the Revenue.

Revenue will be working with the newly established water authority Irish Water; the Local Government Management Agency will be sending a “refresh file” in July and additional databases from utility companies will be accessible.

Reminder letters will be sent to those in the PAYE sector first, with Revenue staff turning their attention to that matter “in the next 10 days or so”.

They will be given a “very short time window” to file online. “After that we will be sending the request to their employers to begin deduction.”

Tax clearance
The question of taking money directly from bank accounts “arises way down the road”. She said if the self-employed who had not engaged looked for a tax clearance certificate after July 1st they would not get one.

Ms Feehily said 73 per cent of those who had filed returns did so online while 22 per cent posted back the form received from Revenue and 5 per cent filed over the phone.

“We are now moving quickly into compliance mode and have already begun to identify the non-engagers for follow up action. We owe no less to all the compliant taxpayers who have voluntarily filed their returns,” she said.

Ms Feehily said she had been surprised at how many people had paid up front. She said 46 per cent of people filing returns chose to pay using debit or credit cards. Fifteen per cent had paid by cheque while 27 per cent had opted for direct debit. Five per cent opted for voluntary deduction at source, with seven per cent choosing to pay through the external service providers.

Referring to the €100 household charge, Ms Feehily said: “It’s not going away”. She said those who had not paid owed €144 if they complied before July 1st, but the amount would rise to €200 “when it comes to us in July”.

Asked about reports of a special tax deal with Apple, she said: “Revenue doesn’t do special deals on tax rates for any company of any size.”