Private meeting scheduled to take place in Galway on Tuesday 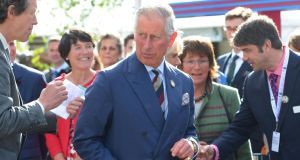 The private meeting is scheduled to take place in the afternoon. Other Sinn Féin representatives will meet Prince Charles in Sligo.

The decision to participate in the visit was made at a meeting of the party’s ardchomhairle in Kilkenny on Saturday.

“Thankfully the conflict is over. But there remain unresolved injustices,” said Mr Adams. “These must be rectified and a healing process developed. There is a responsibility on us all to promote reconciliation and seek to promote healing.”

Sinn Féin did not sanction party participation in Queen Elizabeth’s 2011 visit to the Republic, but Mr McGuinness shook hands and held a private meeting with her in Hillsborough Castle in Northern Ireland last June.

“This was agreed to promote the process of resolving past injustices and promoting reconciliation and healing,” he said.

“Sinn Féin representatives have received a number of invites including the party president Gerry Adams and Deputy First Minister Martin McGuiness. In line with the Ard Chomhairle decision both will meet with Prince Charles.”

Gardaí have have put “high” security measures in place for this week’s visit to the west of Ireland by Prince Charles and the Duchess of Cornwall. The threat level from dissident republicans is pitched at “moderate” and there is “no specific intelligence” on threats, a Garda spokesman said.

“We are not taking any chances,” he said.

Prince Charles and the duchess are due to fly into Shannon airport on Tuesday morning and will be escorted to NUI Galway’s campus on the first leg of their four-day Irish tour. Political party leaders have been invited to NUIG.

The couple will then split for separate engagements, with Prince Charles travelling around the bay to the Marine Institute in Oranmore and then on to the Burren in Co Clare.

Taoiseach Enda Kenny will welcome the prince to the Marine Institute, where he will be given a tour by its chief executive Dr Peter Heffernan.

Prince Charles, who established the International Sustainability Unit in 2010 to try to facilitate a consensus on key environmental challenges, has expressed a particular interest in hearing about the impact of climate change on the world’s oceans.

The Duchess of Cornwall will visit Claddagh National School in Galway and attend a reception at the Mick Lally Theatre to mark the Druid Theatre Company’s 40th anniversary and its new production of DruidShakespeare. The couple will attend a private dinner with President Michael D Higgins and his wife Sabina at Lough Cutra Castle, Co Galway, this evening.

Tomorrow, Lissadell House is part of the couple’s itinerary in Sligo, which begins with a civic reception and a viewing of the Niland Art Collection at the Model contemporary arts centre in Sligo town.

Former Sinn Féín mayor of Sligo Seán McManus, whose son Joseph was killed in a gun battle with security forces in the North in 1992, will attend the function.

Prince Charles will visit the Sligo Institute of Technology and the couple will have lunch at Lissadell. They will visit the grave of poet WB Yeats and attend an ecumenical service in St Columba’s Church in Drumcliffe.

An initial proposal to unveil a plaque at the church in memory of the prince’s great-uncle, Lord Mountbatten, who died off Mullaghmore in an IRA bombing almost 36 years ago,has been abandoned.

Commenting on behalf of Prince Charles, Clarence House said “a number of ideas were discussed when the programme was being put together, including a plaque”, but it understood the local community suggested a tree-planting and Clarence House was happy to agree with this.

The tree would be planted at the church by the couple, it said, and an accompanying plaque would “not reference Lord Mountbatten” as the church service was on the theme of peace and reconciliation.

The couple will then be taken to Mullaghmore Harbour and will conclude their day with a visit to Sligo races. They will travel to Northern Ireland for engagements on Thursday and Friday.