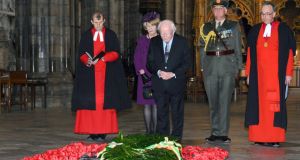 President Michael D Higgins, with his wife Sabina Coyne, at the grave of the Unknown Warrior in Westminster Abbey. Photograph: Anthony Harvey/Getty Images

It was fitting that President Michael D Higgins took the opportunity of his address at the Palace of Westminster yesterday to acknowledge the contribution of Irish parliamentarians to the cause of Irish freedom, and also to the contribution generations of Irish emigrants have made to the development of Britain.

Although next month will mark the centenary of the passage of the Home Rule Act, the contribution made by Irish parliamentarians to the cause of independence and the shape of modern democratic institutions in Ireland frequently goes unacknowledged.


Irish parliamentarians
Speaking in the institution where great Irish political leaders such as Daniel O’Connell, Charles Stewart Parnell and John Redmond worked tirelessly in the cause of Irish freedom, the President gave due recognition to their struggle.

He didn’t gloss over their failures, or the fact that the ultimate failure to deliver on Home Rule led to bitterness and violence “which cast a long shadow” over the relationship between the two countries, but his nuanced speech had a message for Irish people as well as his British audience.

President Higgins pointed out that, while the Catholic Emancipation Act of 1829 was secured by O’Connell, the Liberator set no border to his concern for human rights. His advocacy also extended to causes and movements for justice around the world, including the struggle to end slavery.

The President quoted O’Connell’s dedication to seeking freedom “attained not by the effusion of human blood, but by the constitutional combination of good and wise men”.


Idealism
He went to on suggest that it was that kind of idealism that served to guide and influence, so many years later, the achievement of the momentous Belfast Agreement of 1998, founded on the cornerstones of equality, justice and democratic partnership. That agreement was a key milestone on the road to today’s “warm, deep and enduring Irish-British friendship”.

“The pain and sacrifice associated with the advent of Irish independence inevitably cast its long shadow across our relations, causing us, in the words of the Irish MP Stephen Gwynn, to ‘look at each other with doubtful eyes’.”

He also remembered the large number of Irish men who died in the first World War, quoting Tom Kettle, another MP of that lost generation of parliamentarians, who died in the trenches.

Suggesting that Kettle had died “an Irish patriot, a British soldier and a true European”, the President noted the joint European identity that Ireland shared with the United Kingdom for the past 40 years.

“We recognise that it has been in that European context of mutuality and interdependence that we took the most significant steps towards each other.”

Another interlinked theme was the contribution that generations of Irish emigrants have made to the development of Britain. The President spoke of how some of his own siblings had made their home in the UK, and he expressed his pride that the large Irish community was represented in every walk of life in the country.


Living heart
“That community is the living heart in the evolving British- Irish relationship. I greatly cherish how the Irish in Britain have preserved and nurtured their culture and heritage while, at the same time, making a distinctive and valued contribution to the development of modern Britain.”

The speaker of the Commons John Bercow took a similar theme, saying that real substance was wrapped in the symbolism of the President’s visit.

He added that, contrary to Yeats’s view, “the centre has held” in our time , and this had made possible the new relations between the two countries.