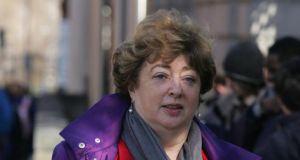 Ms Murphy last week visited the Liverpool Women’s National Trust Hospital, the biggest maternity hospital in Europe. The visit, to deal with the issue of fatal foetal abnormalities, was organised by the Doctors for Choice organisation.

She said they asked staff at the hospital if there was anything different about Irish women when they presented at the hospital with fatal foetal abnormalities, very often with a much wanted pregnancy.

Ms Murphy said they were told: “Irish women expected the staff to be judgmental, because it’s almost a conditioning. They got compassion in a country when they should have got the same compassion and duty of care” in Ireland.

The Kildare North TD said: “I found myself thanking the staff for their compassion and I felt ashamed that our country could not offer that compassion” to its own citizens.

Speaking during the overnight debate on the Protection of Life During Pregnancy Bill, Ms Murphy asked what would happen if the section dealing with suicide was excluded.

“How would it be provided for because the electorate had given a set of instructions,” she said and called on TDs to “just think it out”. She asked: “What would be the consequence if you take it to the logical conclusion? Are you going to curtail or remove the right to liberty of a woman or a child?”

Ms Murphy highlighted the referendums on abortion in 1992 and 2002.

There were three separate ballots in 1992, she noted. “The first sought to limit the rights based on suicide and the citizens of this country decided that they didn’t want to limit that right. The second was the right to travel and the third was the right to information and both were passed,” she said.

“The 25th amendment in 2002 also sought to tighten the constitutional ban on abortion. It would have removed the threat of suicide as grounds for legal abortion in the State and it was rejected.”

The Independent TD said the Constitution put the citizens at its heart. “They have given us a set of instructions and we have failed over a period of decades to put that into law.”

She asked: “Was it group think in 1992 and 2002? That was not an opinion poll. That was the people of Ireland giving us a set of instructions that we have an obligation as legislators to take on board and to deliver on.”

Health worker double-paid thousands for same shifts by HSE and agency 13:58
Hoteliers call for State funding to implement eco-friendly measures 13:55
‘I think she is terrified’: Woman facing deportation to Nigeria from Sligo 14:29
USI president criticises UL over mew accomodation plans 13:49
Ex-paratrooper and IRA man named as being involved in murder of three soldiers 13:37