Peter Robinson to step aside as NI First Minister 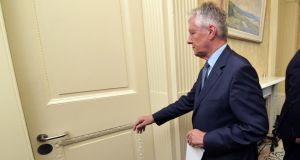 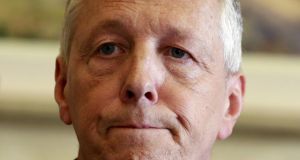 Northern Ireland First Minister and Democratic Unionist Party (DUP) leader Peter Robinson at a media conference in Stormont Castle in Belfast, Northern Ireland, September 10th, 2015. Mr Robinson said he will step aside and that all bar one of his DUP Ministers will also resign amid the crisis over an IRA-linked murder. Photograph: Cathal McNaughton/Reuters 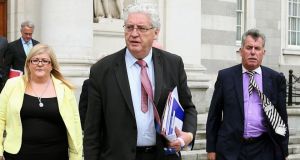 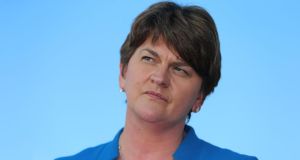 DUP Minister for Finance Arlene Foster is to take over as Northern Ireland’s First Minister for a period of six to eight weeks, Enda Kenny has told the Fine Gael parliamentary party think-in in Adare. File photograph: Niall Carson/PA Wire 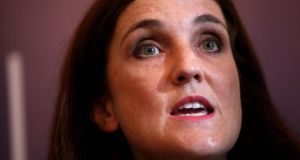 Democratic Unionist Party leader Peter Robinson has announced he is to step aside as Northern Ireland’s First Minister and that party colleague and Minister for Finance Arlene Foster is to take over as temporary First Minister.

Mr Robinson said he will step aside and that all his DUP Ministers bar Ms Foster would also resign amid the crisis over an IRA-linked murder.

Northern Ireland secretary Theresa Villiers said she would not suspend the devolved institutions following the development. The situation, she said, was very grave.

“It is a sign of a complete breakdown in the working relationships within the Executive. Powersharing only works effectively if you can have effective relationships between parties from different sides of the community and different parts of the political spectrum.”

“I will be working and continuing to work with determination with the prime minister, with the Northern Ireland parties and with colleagues in the Northern Ireland Government to get a way through these crises and find a resolution to the hugely important challenges we now face,” she said.

“We did not think the circumstances will justify suspension, that has not changed and obviously suspension would not resolve the two big problems we face - implementation of the Stormont House Agreement and the presence of paramilitary organisations.

“The only way those problems are going to be resolved are through intensive cross-party talks.

“I think time is very short because of the seriousness of the situation, I think that today’s events make the situation much more serious.”

“Paramilitaries were never justified, they need to disband ... there is more that can be done to work towards the day when those organisations are a bit of Northern Ireland’s past, not its present.”

Mr Robinson released a statement on decisions in his party, saying: “As someone who invested many hours trying to bring devolution to Northern Ireland, and to maintain it, I have tried to create space to allow these critical unresolved matters to be dealt with in a structured manner.

“The failure of the SDLP and Sinn Féin to implement the Stormont House Agreement together with the assessment from the Chief Constable of the involvement of IRA members in murder, the continued existence of the IRA and the arrests that followed has pushed devolution to the brink.

“Yesterday I indicated that we would ask the Business Committee to adjourn Assembly proceedings to allow negotiations to take place. That proposal did not find sufficient support. The Government can still legislate to suspend the Assembly and allow space for the parties to negotiate.

“In light of the decision by republicans, nationalists and the UUP to continue with business as usual in the Assembly, I am therefore standing aside as First Minister and other DUP Ministers will resign with immediate effect with the exception of Arlene Foster.

“I have asked Arlene to remain in post as Finance Minister and acting First Minister to ensure that nationalists and republicans are not able to take financial and other decisions that may be detrimental to Northern Ireland.”

A spokesman for British prime minister David Cameron said: “The prime minister is gravely concerned about the situation in Northern Ireland following developments there today.

My statement announcing the resignation of DUP Ministers: http://t.co/RZyT8SXH0m

“They discussed options for what more the UK government could do to comprehensively address all remaining paramilitary activity in Northern Ireland.

“The PM underlined the need for intensive cross-party talks to identify ways to tackle all paramilitary groups and to get on with implementation of the Stormont House Agreement.

“The prime minister said that there should be a return to the spirit that had seen politicians show such leadership over the years to deliver a peace process that has inspired people across the world.

“The Government objective is clear: we want to work with political leaders for a Northern Ireland where politics works, the economy grows and which is no longer defined by its divided past but by its shared future.”

The US administration has urged Northern Ireland’s leaders to resolve their outstanding problems.

“We again encourage all of Northern Ireland’s political parties to engage constructively in these negotiations in order to strengthen the devolved institutions.

“Northern Ireland’s achievements are the result of dialogue and responsible leadership; now is the time to re-energise the parties’ commitment to implementing the Stormont House Agreement and addressing remnant paramilitary activity.

“The United States remains actively engaged and will continue to support political progress.”

Speaking in Belfast on Thursday evening at the Northern Ireland talks at Stormont House, Mr Flanagan said he greatly regretted the decision of the DUP “to resign the majority of their Ministerial seats and that of Peter Robinson to step aside as First Minister”.

“What we want is for the devolved power-sharing Executive and Assembly to work as envisaged in the Good Friday Agreement and deliver peace, prosperity and reconciliation for the people of Northern Ireland,” he said.

“Minister [Sean] Sherlock and I, with the strong support of the Taoiseach and Tánaiste, have been working with the Secretary of State and with the Northern Ireland parties to resolve the critical issues which threaten the future of the power-sharing institutions.

“The Irish Government is absolutely committed to the full and effective operation of the Institutions of the Good Friday Agreement.

“Following today’s serious developments, the powersharing institutions are on the edge of the precipice. I urge Northern Ireland’s political leaders to take a step back and consider the gains achieved over recent years, the benefits to the people of Northern Ireland and what is now at stake.

“I encourage all parties to reflect carefully. The Secretary of State and I will be here in Stormont House on Monday morning and I invite the parties to join us for discussions on how we find a way through the current serious impasse. We will of course remain available to the parties over the weekend.”

The SDLP earlier said it would oppose the adjournment of the Assembly.

SDLP leader Dr Alasdair McDonnell said: “Unlike others in the political system who have rushed to judgment, we have been steady and spoken to everyone interested in the current crisis, including the Irish Government this morning. Our decision is to oppose the adjournment because it is not a solution.”

The DUP had pushed the idea of adjournment of Assembly business because the alternative – unless the British government were to suspend Stormont – was the collapse of the power-sharing institutions.

Adjournment would buy four to six weeks of new Stormont House talks during which there would at least be some chance of the current crisis being resolved.

Earlier, Mr McDonnell had expressed concern that an adjournment would mean “suspension by degrees”.

Speaking after a meeting with the Taoiseach in Dublin - and before the SDLP made its decision - he described the DUP’s response to the latest Northern crisis as “totally disproportionate and excessive”.

Dr McDonnell was speaking to The Irish Times after meeting the Taoiseach for close to two hours on Thursday morning.

The SDLP delegation returned to Belfast to consult with party members after the meeting, which was also attended by Mr Flanagan and the Secretary General of the Government Martin Fraser.

The emergency talks in Dublin were scheduled in a bid to persuade the SDLP to support a call to adjourn the Assembly in order to facilitate talks on the key issues of the IRA and the welfare deadlock.

Dr McDonnell said the meeting had been “robust” as well as “full and frank”.

He said the options the DUP had put forward in the North were all “heavily negative and destructive”.

He added: “We see adjournment as suspension by degrees. We see it as being a delay of suspension. It will be used as a delaying tactic rather than attempt to arrive at any solution.”

“These are the people’s agreements and institutions voted for by the vast majority of people across Ireland,” Ms McDonald said.

“Sinn Féin is opposed to any adjournment or suspension. Anyone promoting the idea to save the institutions by closing them down is deluded.”