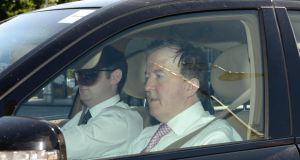 Minister of State John Perry arriving at Government Buildings this month for a vote on the abortion Bill. On April 16th this year he was in the news for asking bank chiefs to an advisory group meeting to discuss lending and debt problems with small and medium-sized business

Internal Danske Bank records filed in the Commercial Court suggest John Perry’s finances veered into the danger zone in 2011, the year he became Minister of State for Small Business. Can he maintain his increasingly tenuous grip on his ministry? That seems doubtful.

In public at least, senior Government figures are unwavering in their support for Perry. Within the Kenny administration, the argument goes that he is simply another victim of recession, like many thousands of others, and should be given space to put his precarious affairs in order. Private attitudes within the Coalition are more circumspect. Unexpected news of his tax difficulties while in office has only amplified questions over his future.

These are torrid times indeed for Perry, a Fine Gael stalwart in Co Sligo who has been in business in Ballymote since the mid-1970s. He once recounted working 100 hours per week for 20 years, serving revellers chips at 3am after the Saturday disco and opening a shop at 9am the morning after.

In an interview 13 years ago, Perry told how he borrowed heavily in 1989 and 1990 to revamp his supermarket. “Borrowing that much money gave me great understanding of business. I’m not saying I never made a mistake, but mistakes that cost you money are the ones you never make again . . .” he said at the time.

Final attempt
Lessons learned, and learned again. Danske secured judgment against Perry and his wife Marie for €2.47 million in the Commercial Court last Monday, although the ruling was stayed to September 2nd to allow time for a final attempt to restructure the loans. If it is a given that the default on his Danske loans seriously erodes his credit standing with other lenders, the damage to his political credibility is no less severe.

Perry’s responsibility for small business means he should not be in any way compromised in his political dealings with the banks but he apparently is, and in a very public way too. He is known to have used his ministerial title when signing correspondence on his personal loan issues with Danske and he has taken a vocal public stand on financing issues for small business.

Court disclosures
While court disclosures make clear his difficulties with Danske, Land Registry filings point to unquantified borrowings from other institutions. They are: Allied Irish Banks; Bank of Ireland; EBS; ACC Bank; and Irish Life & Permanent. All except ACC are owned or backed by the State.

Given the disarray in Perry’s financial affairs, the question arises as to whether the Government should have made him Minister at all after the February 2011 general election. According to an informed source, the understanding then was that “matters were in hand”.

Whatever about Perry’s acceptance of the post, minutes of meetings with Danske officials show he was mired in financial difficulty within a year of taking office. The minutes were among the exhibits in this week’s Commercial Court proceedings.

The Minister attended talks with Danske’s credit department at 9am on Wednesday, January 18th, 2012. Perry opened by saying BoI had resolved to “assist” in relation to his tax arrears. “He has already paid Revenue three instalments of 8k in reduction of 125k liability,” says the bank’s minute of the meeting. In relation to miscellaneous creditors, he believed the debts could be settled for €125,000 and said AIB had agreed to provide an 11-year facility. “He said that he receives salary/expenses of [€] 9,200 per month which will cover the BoI/AIB loans,” Danske’s note says.

The minute records Perry optimism in relation to the a new supermarket tenant: “He advised that Barry group are trading strongly in the supermarket and are targeting to increase annual turnover to [€]5 million over time. He said this would put a value of [€]2 million on the store. (Turnover in year to September 2011 under Perry management was [€]2,157k.)” .

“His aim is to have Barry group purchase the store at a future date and he asked if we would accept a discount on our loan in such a situation. I responded that this would not happen and we would look for full repayment of our debt.”

A review meeting was called at 3pm on Monday, April 16th, 2012, at which Perry suggested that Danske reduce the interest on the loan to match rental income from the supermarket. “We advised that the bank is losing money on the loan because of the low interest rate.”

Perry said he received an €88,000 loan from Bank of Ireland to discharge his tax arrears. “He advised that the Revenue debt has now been paid off,” Danske’s minute of the meeting says. AIB had also advanced him €125,000.

‘End-game’
Two AIB charges on a property he owns in Co Sligo were registered on June 13th, 2012. A BoI charge in respect of his half of a separate property was registered a day later.

By January 31st this year, Danske advised Perry that it was at “end-game” in relation to its patience. Perry expressed shock at the bank’s aggressive approach and alluded to the personal consequences “with his job” of action by the bank to call in the loan.

All the while, of course, Perry was a Minister in the lower tier of Government with important duties. On April 16th this year, for example, he was in the news for asking bank chiefs to an advisory group meeting to discuss lending and debt problems with small and medium-sized business. The next day, Perry was back in Danske for talks. An official “advised that Danske was in the lucky position that we could talk settlements, but that it was up to J.P. to come to us with his realistic proposals to start the ball rolling.” In the event the ball did not roll. A moment of truth now looms.