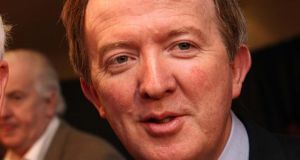 John Perry was known to have made big investments during the boom years and his subsequent financial difficulties have been known for some time. Photograph: James Connolly

Last April, Minister of State for Small Business John Perry wrote to the chief executives of Bank of Ireland and AIB asking them to meet a Government advisory group and set out their positions on funding small and medium-sized enterprises, and how they dealt with SMEs with distressed loans.

“It is imperative that we listen to the voice of small business,” said Perry. Indeed when Taoiseach Enda Kenny appointed him to the ministerial ranks it was because of Perry’s “understanding of small business”.

The extent of Perry’s understanding of distressed loans in the SME sector became clearer yesterday when the Sligo politician and his wife, Marie, consented in the Commercial Court to a judgment of €2.47 million against them in favour of Danske Bank.

The debt related to a €2.42 million loan advanced to the couple in October 2011, which itself was a restructuring of existing loans. To use the phrase made infamous by the Anglo Irish recordings, Perry as the relevant Minister had skin in the game.

Security
The court proceedings disclosed that security and collateral on the loan included the Stone Park Restaurant, Perry’s Hardware shop in the politician’s home town of Ballymote, Co Sligo, as well as 50 acres of agricultural land.

The Fine Gael politician did not make himself available for comment yesterday and a spokeswoman said: “The matter remains before the court and he will not be making any comment until [proceedings are concluded].”

Registration of the judgment is scheduled for September 2nd. The Perrys had sought a three-month stay on the registration to allow them seek a resolution but counsel for Danske Bank objected on the grounds that they had had ample time to do so.

The judgment will create major political problems for Perry and might even cast a strong doubt on his future status as a TD. Officially the Government will make no comment about the case but privately officials have said it is a private matter for the Minister of State that does not impinge on his public duties in Government.

He will be the second Minister in the past year to have his financial affairs exposed to scrutiny, following the inclusion of Minister for Health James Reilly’s name in Stubbs’ Gazette. Politically, however, the judgment will have more ramifications for Perry.

He is, after all, the Minister for Small Business. And in his position, can he credibly call – as he did last April – for the chief executives of the country’s biggest banks to explain their position on distressed loans to an advisory group of which he is a member when he himself is in that category? The Dáil is in recess but will be returning within a fortnight of the judgment being registered.

Unless Perry finds a solution over the next five weeks it is clear there will be calls for his resignation.

Substantial portfolio
Perry is known to have made big investments during the boom years and his subsequent financial difficulties have been known for some time. In the 2012 register of interests for the Dáil he declares a substantial portfolio of assets, mostly in Ballymote. They include a supermarket, a funeral home, 40 acres of woodland, 16 acres of agricultural land, constituency offices, a hotel, and a house on 2½ acres.

The case against the Perrys was heard in the Commercial Court, which is a fast-track route.

Danske Bank would have the option, under the new Personal Insolvency Act, to initiate bankruptcy proceedings. As David Hall of the Irish Mortgage Holders’ Organisation pointed out, that provision of the new Act can be used by debtors but it’s a double-edged sword. “It is open to be used by creditors as well,” he said.

Under section 41 of the Electoral Act 1992, an undischarged bankrupt is disqualified from being a TD or a Senator. If a person is declared bankrupt the only option open is to resign his or her seat.

Hall says that if the bank was intent on pursuing the issue it could happen relatively quickly.

But the bankruptcy bar to membership of the Houses of the Oireachtas could be open to question before the courts.

In their updated edition of the late Prof John Kelly’s seminal book The Irish Constitution, Gerard Hogan and Gerry Whyte assert that that provision of the Electoral Act (barring bankrupts and prisoners from being TDs) could be vulnerable to a constitutional challenge.

“[The exclusion could not] be justified by reference to some wider concept of the public interest (in the sense that it would be generally undesirable if a member of the Dáil were either a prisoner or a bankrupt) since the power to disqualify would not seem designed to protect the electorate from the consequences of its own foolishness,” they wrote.

John Perry Profile
John Perry (56) is a businessman from Ballymote, Co Sligo, who has been a TD since 1997. His family business includes a supermarket, hardware shop, funeral home, restaurant and hotel, all centred around his native town.

His experience in running small businesses has informed much of his Dáil career. He was chair of the Public Accounts Committee for two years between 2002 and 2004 and party spokesman on small business in the run-up to the general election. He was a supporter of Enda Kenny during the leadership challenge in 2010 and his appointment may have been helped by Fine Gael winning two out of three seats in Sligo-North Leitrim for the first time.