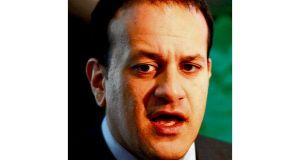 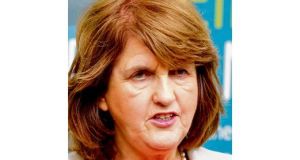 Two Cabinet Ministers have clashed over what the Government’s budgetary strategy should be in the aftermath of the promissory note deal.

Minister for Social Protection Joan Burton argued against further austerity and for the need to start this year using the proceeds from the deal with the European Central Bank. But Minister for Transport Leo Varadkar warned there would have to be further spending cuts and tax increases, because taxes were reduced too much by the previous government.

The two Dublin West TDs were speaking during the second of three days’ debate on the promissory note arrangement, which the Dáil will vote on today. The Labour Party Minister said the public had stayed the course throughout the financial collapse, the economic upheaval and austerity budgets that followed. But she warned “there is a limit beyond which additional austerity becomes counterproductive and after five years of a European response centred on austerity I believe we are close to that point now”.

Ms Burton said the IMF had admitted through its staff reports that it underestimated the effects of austerity on economies throughout the financial crisis. The Government was committed to getting the deficit down, but “the proponents of austerity seem to think that deficit reduction can only be done in one way, by cutting endlessly”.

Ms Burton said the best way to reduce the deficit was to get people back into work which would boost consumer spending, increase the State’s tax take and reduce the borrowing requirement.

The Minister pointed to CSO data yesterday which “underlines once again the crucial importance of welfare payments in reducing poverty”. The CSO figures showed that in 2011 welfare payments reduced the at-risk-of-poverty rate in Ireland from 51 per cent to 16 per cent. “That is the best outcome in the EU,” Ms Burton stressed.

She said the €20 billion welfare budget was not just about protecting the most vulnerable but as a stabiliser to support the economy by putting money into the hands of consumers who needed it and through them into the tills of business.

Mr Varadkar, however, took a diametrically opposed view. He targeted social welfare payments and said they were much higher than in the UK, which was giving Ireland a loan. Even now he said Irish social welfare payments were the fourth highest in the western world. Irish public sector pay was much higher than in Germany and Austria, accounting for taxation and the cost of living, the Fine Gael Minister added.

He said it was one of the “worst myths” to say the public was facing tax increases and expenditure cuts solely or predominantly because of the banking crisis. “That is simply not the case.” The reason “we are facing austerity, spending cuts and tax increases in Ireland is simply that, during the boom period, taxes were reduced too much”.