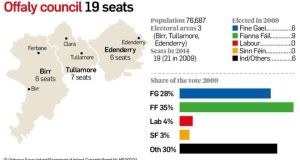 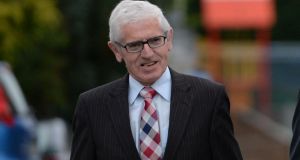 Fianna Fáil are running 11 candidates and have vowed to continue canvassing for long-serving councillor Noel Bourke (71), who is recuperating after a recent illness

With a smaller number of council seats and three town councils abolished, Offaly’s local election race will be hotly contested.

A total of 38 candidates are vying for seats on the new smaller council, which is reducing in size to 19 seats from 21 in 2009.

The electoral areas have also changed since 2009, when the county had two four-seaters in Birr and Ferbane, with seven- and six-seaters in Tullamore and Edenderry.

It now has three electoral areas, Birr and Edenderry with six seats each and Tullamore retaining seven seats.

Offaly was one of the key battle grounds for anti-windfarm campaigners, particularly in the north of the county, where major plans were announced by both private companies and Bord na Móna, who were seeking to sign up landowners.

Notable absences
There are a number of notable absences from the local election race with seven, or a third of Offaly’s sitting councillors, not contesting the elections.

They include long-standing Fine Gael councillors Constance Hanniffy and Percy Clendennen, whose son John Clendennen will look to carry on the family tradition when he runs in the Birr area.

Councillor Paddy Rowland of Fianna Fáil, who was co-opted into the council with the election of Barry Cowen to the Dáil in 2011, and his party colleague Cllr Sinéad Moylan-Ryan, whose father, Pat Moylan, is a former senator and councillor, have also decided against running.

Edenderry Fine Gael councillor Nichola Hogan, who was first elected to Offaly County Council in 2009, is another who will not be contesting the election.

With only nine candidates in the field, three in each of the local electoral areas, Fine Gael will be unable to control the council without support. Fianna Fáil are running 11 candidates and have vowed to continue canvassing for long-serving councillor Noel Bourke (71), who is recuperating after a recent illness.


Retire
Although two independent elected council members are set to retire, Independents now make up the largest number of candidates in the county, with 12 in the running.

Sinn Féin will be hoping to cash in on the party’s growing popularity and and is running candidates in each of the three local electoral areas.

Their best chance lies in the Tullamore area with town councillor Brendan Killeavy, who narrowly missed winning a county council seat in 2009.

The Labour Party has two candidates running for seats, in Tullamore, with new candidate Paddy Doheny, and in Edenderry with town councillor Declan Leddin.

The Green Party is running one candidate, Richard Brennan in Tullamore.

Although candidates in Birr and Ferbane are now effectively fighting over six seats as opposed to the eight previously available in the two areas, Edenderry has emerged as the toughest election battle ground in the county with 14 candidates vying for six seats.

An equal number of candidates are running for the seven seats in the Tullamore area, while 10 candidates will fight it out over Birr’s six seats.