O’Donnell a seasoned media performer free from links to Coalition 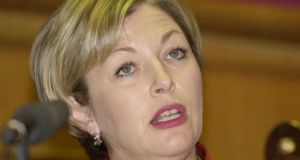 The Government appears to have taken the view that the political decontamination process of former Progressive Democrat minister Liz O’Donnell is complete. Photograph: The Irish Times

The nomination of Liz O’Donnell as the new head of the Road Safety Authority (RSA) appears to be an astute move by the Government.

Gay Byrne, who stepped down at the beginning of September after eight years in the role, was never afraid to speak his mind about issues such as the impact of the reduction in Garda traffic corps resources and will be a hard act to follow.

The fact that road fatalities are on the rise is a tragedy.

The RSA needs a prominent advocate capable of articulating its life-saving message in a way that attracts maximum attention.

Ms O’Donnell is a seasoned media performer, undeniably photogenic and, crucially, unattached to either of the Coalition parties.

She has plenty of political experience with the now defunct Progressive Democrats - no friends to either Fine Gael or Labour - but went cold turkey politically after voters in Dublin South declined to re-elect her in 2007.

After seven years outside Leinster House, her political decontamination process is deemed complete.

Fine Gael and Labour made a big play of their promises to eliminate cronyism ahead of the 2011 General Election, but in reality the Coalition has a blemished record.

The McNulty controversy has refused to go away and returned to the news headlines today after this paper reported on Freedom of Information documents that show Department of Arts officials were asked two days before Mr McNulty was appointed to the Irish Museum of Modern Art (Imma) board which State boards under its control had vacancies.

As this paper also reported earlier this month, only about 20 per cent of ministerial appointments to boards of State companies and institutions have been done through the public process.

Interestingly, Ms O’Donnell is understood to have applied one year ago to the little-known Board Diversity Initiative, which aims to highlight the credentials of so-called “board-ready” women and bring them to the attention of Government.

Vivienne Jupp, the first female non-executive chair of CIE, set up the initiative, although information about is rather sparse.

It was established in 2010 and since it was launched more than 30 women on the panel have been appointed to boards.

Last month, Minister for Public Expenditure and Reform Brendan Howlin announced a revised model for Ministerial appointments to State boards, requiring all vacancies be advertised openly on the stateboards.ie portal.

However, anyone whose interest has been sparked will be disappointed to see this message on the website:

“There are currently no State Board appointments available. Please check back again soon.”