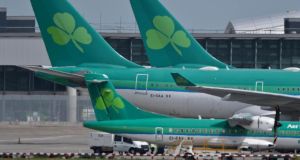 Minister for Transport Paschal Donohoe said there are a variety of views in Government in relation to the State’s stake in Aer Lingus. Photograph: PA

There is no Government consensus on the sale of the State’s stake in Aer Lingus to International Airlines Group (IAG), Minister for Transport Paschal Donohoe said on Friday.

The Minister said there was a “variety of views” in Government in relation to the possible sale and that a recommendation would be brought to Cabinet soon. Mr Donohoe declined to say on what date that would happen.

The State holds a 25.1 per cent stake in the airline.

“It is a very big decision for our country and a matter of huge importance to Aer Lingus. This is an issue that I will be bringing a recommendation to Cabinet now in the coming weeks on,” he said.

“There are a variety of views in Government in relation to this matter but what everybody is very clear on and united on are the ways in which we’re going to evaluate this proposal.”

Issues of access, competition and the future of Aer Lingus would be considered.

He was speaking at the announcement of the one millionth Leap card at St Stephen’s Green, Dublin.

He was asked about the UK’s Competition and Markets Authority (CMA) saying it would not change an order for Ryanair to sell down its 30 per cent stake in rival Aer Lingus because of IAG’s proposed bid for Aer Lingus.

Mr Donohue said Government believed the IAG bid “did not constitute a change of circumstances” in relation to continued competition in key routes.