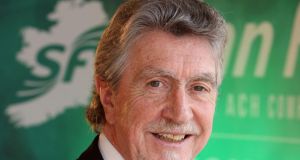 Sinn Féin’s Mickey Brady leaped over the finishing line in Newry/Armagh 4,000 votes ahead of his nearest rival. Mr Brady secured 20,488 votes to secure a seat in Westminster filing the shoes of his colleague Conor Murphy, who stepped down in this election.

He said: “We have won with an increased vote. I am replacing Conor Murphy which I am so proud to do. I will carry on the good work.” Mr Brady, who took 41 per cent of the vote, said this was a small piece of history in the making.

Ulster Unionist Party candidate Danny Kennedy trailed in second place with 16,312 and SDLP’s Justin McNulty followed with 12,036 of the share.

Mr Kennedy said he was particularly proud of the campaign he had run over the past number of months.

He said: “I congratulate the winner but I do regret that the voice of Newry/Armagh will continue not to be heard where it should be in the House of Commons.

“I would also say on behalf of the Ulster Unionist Party, it is not only in firm business here in Newry/Armagh but it is back in the House of Commons.”

The biggest rivalry in the campaign had come from McNulty and Brady. Mr McNulty said he was very disappointed but this had been an extraordinary learning curve for him and his team.