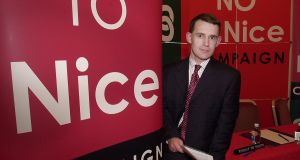 Justin Barrett, of the No to Nice Campaign at Buswells Hotel, Dublin, in August 2002, before the second referendum on the treaty. File photograph: Brenda Fitzsimons

A former activist with the militant anti-abortion group Youth Defence, Justin Barrett is best remembered for his role in the defeat of the Nice Treaty referendum in 2001.

Barrett and his insurgent campaign, an eclectic mix of young anti-abortion campaigners and left-wing anti-EU protesters, caught a cosy political establishment by surprise.

The Nice defeat was the zenith of his political influence, but it was to be short-lived. In the second referendum, held the following year, the political parties were less complacent and put a major campaign behind the treaty.

In the 2004 European elections Barrett campaigned on a largely anti-abortion and anti-immigration ticket, but failed to make an impression, winning only 2 per cent of the vote. He has not played a prominent role in politics since then.

He is described as the president of the National Party, whose nine principles espouse a nationalist, anti-abortion, anti-EU, anti-immigration platform.

The themes will be familiar to anyone who has followed Barrett’s political career. In 1998, he published a book entitled The National Way Forward! which comprised many of the elements of a political manifesto.

He espoused the creation of a “Catholic Republic”, where immigration would be greatly restricted (an “Irish Ireland”), divorce and abortion banned, and patriotism elevated to the highest of public virtues.

Unrestricted immigration, he warned, would change “the whole nature of the country – not merely ethnically, but culturally, socially, politically, religiously and otherwise”.

He predicted an economic crash, though not for the reasons that eventually brought one, and said it should prompt a return for “the most basic values, true for all times and all places -– Faith, Family and Nation”.

Barrett proposed the abolition of the parliamentary system – indeed, he predicted its inevitable decline. “Parliamentarianism,” he wrote, “is a dead idea walking.” A better system, he argued, was an elected presidential system, where political power would be concentrated in the hands of one individual.