Miriam Lord: the ‘big people’ don’t believe each other

Noisy protests, water charges, and children from Monaghan who know better than their elders 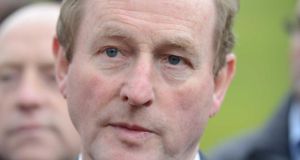 It’s not that we weren’t concerned about the “ordinary people, particularly women” going about their business by walking in “an ordinary way” as “ordinary citizens” from a perfectly ordinary occasion. In fact, we feel their pain.

It isn’t nice to have people roaring obscenities at you when you are leaving a meeting of a political party in your local area. This happened, according to the Taoiseach, following a Fine Gael regional meeting in Limerick.

We believe him, because he told the Dáil yesterday that he witnessed what happened. Some of the people shouting “abusive and filthy” language at grassroots members of his party were holding Sinn Féin placards.

Of course, Enda could be lying. But, then again, he was there. That’s a difficult thing to make up. Gerry Adams didn’t believe him. And Gerry knows a thing or two about the truth.

But, awful as all this is, we were more worried about the small children of Co Monaghan. They are so traumatised by the Irish Water controversy that they felt compelled to write a letter to the Taoiseach.

The school-going tots of Monaghan are of more impressionable years than the good ladies of Fine Gael, who had to endure an unwarranted barracking on the way out of their party gathering in Limerick.

The Taoiseach brought Monaghan into the picture when replying to Adams during Leaders’ Questions.

And so to yesterday’s proceedings, when Adams returned to the subject. The Taoiseach’s remarks were “clearly an effort by him to demonise the anti-water charges campaign, and, particularly, Sinn Féin.” Enda should withdraw them, said Gerry, because they are “inaccurate and untrue”.

But he didn’t. The Taoiseach stressed that he encourages peaceful protest, but he is in no doubt about what happened on Monday night. “I’m not blind. I saw the posters myself.”

Then he addressed the water charges. For the benefit of Sinn Féin, and the protesters, he outlined the details of the new billing regime.

“The charges are now affordable” he said. And then: “I had letters from a school in Monaghan yesterday – a primary school – where young children said: ‘Big people do not know how to save water.’ These water meters are very good. It will mean there will be far less money spent on wasting water.”

As far as he sees it, the primary school pupils have “a far better view than Sinn Féin appear to have”.

Gerry Adams still wasn’t happy, though. The Taoiseach had made “spurious and untruthful remarks which he repeated today”. Gerry was quite satisfied that Sinn Féin didn’t have any involvement in the nasty and noisy scenes that greeted Fine Gael grassroots members.

Adams was very disappointed. “Your answer shows a lack of a sense of grace.” Sinn Féin had nothing to do with the demonstration, even if the Taoiseach saw the party logo on placards.

Government backbenchers weren’t so convinced. As far as they are concerned, it was a case of “liar, liar, IRA membership card on fire!”

It didn’t get any better for the Sinn Féin president when he tried to drill into the costs involved in setting up Irish Water. The company spends nearly a million every month on advisers, he said, demanding full disclosure of the cost involved. ”Why can the public not know what is being paid to advisers, media advisers in particular?”

The Sinn Féin leader stepped on a landmine there.

They were referring to the current affairs series on BBC Northern Ireland, which ran the second of a two-part investigation into the alleged fiddling of expenses by parties in the Northern Assembly. It was eye-watering stuff, and makes the like of Sinn Féin’s ink-cartridge overspend down here look very innocent indeed.

Gerry Adams ignored the taunts. Because in the case of the Limerick rumpus, he was technically telling the truth. The Taoiseach may have witnessed people waving Sinn Féin placards and verbally abusing people, but, according to Cllr Maurice Quinlivan, they weren’t there in an official Sinn Féin capacity.

The big people don’t believe each other. Never will. Who’s going to tell the children in Monaghan?