Minister for the Gaeltacht still struggling with . . . Gaeilge

After months of language courses Minister for State with Special Responsibility for the Gaeltacht, Joe McHugh, has his first interview as Gaeilge. Harry McGee reports. 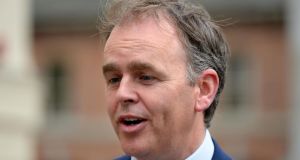 Minister of State with responsibility for Gaeltacht Affairs, Joe McHugh, said he did a very, very weak Leaving Certificate in Irish: his writing skills were okay, but his spoken Irish was very poor. Photograph: The Irish Times

The Minister of State with responsibility for the Gaeltacht Joe McHugh has achieved a “feabhas mór” (big improvement) in the standard of his Irish in the past 10 months.

The Fine Gael TD can now hold a conversation in the native tongue, although his vocabulary remains limited and he still struggles with grammar, turns of phrases and more complex subjects.

In one of his most controversial appointments last year, Taoiseach Enda Kenny promoted Mr McHugh to the key role – where fluency in Irish was seen to be a prerequisite – in the full knowledge the Donegal TD’s Irish was “rusty” to say the least.

Irish language campaigners harshly criticised the appointment, saying it demonstrated the insignificance of the language as a priority within the Fine Gael-led Coalition. Little of the criticism was personally directed at Mr McHugh, who is a popular figure.

In that period, Mr McHugh has worked hard on his Irish. He has taken intensive courses in Glencolumbkille in Donegal, continues with regular lessons, and has employed drivers who are native speakers.

In the interview, he admits, when appointed by Mr Kenny, the Taoiseach’s assessment of his Irish as “beagán meirgeach” (a little rusty) was inaccurate.

It was “ar an úrlár” (on the floor) at the time, he concedes.

He said it was lucky he was appointed in July, as at least he had six weeks to apply himself to learning the language before the Dáil returned in autumn 2014.

He said he himself came from a house just outside the Gaeltacht where Irish was not spoken. He said he did a very, very weak Leaving Certificate in Irish, where his writing skills were okay, but where his spoken Irish was very poor.

In the interview, he relies on a few stock phrase and has not yet achieved the kind of competence in which a political argument could be made.

He does use Donegal phraseology (achan, ar dóigh, go dté, fá choinne) but makes some mistake on words, tenses and declensions.

Connemara-based Fianna Fáíl TD Éamon Ó Cuív said there was no doubt Mr McHugh’s Irish had improved, but had not yet reached anything like the standard that would be required.

Mr Ó Cuív set out a four- point political Irish scale, where zero is no Irish at all; one is enough to do a pre-recorded interview on Raidió na Gaeltachta or TG4; two is fluent enough to do a live interview; and three is the ability to do a live debate at a public meeting or on radio or TV.

He said Mr McHugh has moved from zero to between one and two. “I would not imagine that he would be in a position to debate with me on Raidió na Gaeltachta,” he said.

“As I understand it, Joe McHugh is not at his ease as yet when meeting native speakers from, say, the Aran Islands or Connemara, and speaking to them in Irish.

“For him, personally, it’s a terrific improvement, but is he able to do the job as Minister for the Gaeltacht, which requires Irish? That is another question and I don’t think he is, though he has made a huge effort.”

That assessment is shared by Irish-language broadcasting organisations, which have tended to pre-record their interviews with Mr McHugh.

“There is no doubt there has been an improvement, but the standard is not good enough yet. You cannot really ask difficult questions in a live interview,” says Máirin Ní Ghadhra, a current affairs journalist with Raidió na Gaeltachta.

It can be done but it takes time. Mr Ó Cuív compared Mr McHugh to his Fine Gael colleague from Galway West Seán Kyne, who has managed to go from zero (where he spoke little Irish) to three, where he now regularly (and comfortably) debates in Irish at public meetings and on air.

But Mr Kyne said it took some years of unstinting work on his part to become proficient.