Minister for Justice: No jihadi threat evident in Ireland 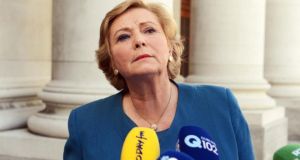 Minister for Justice Frances Fitzgerald yesterday told the Cabinet there is no specific information to suggest there may be a jihadi threat in Ireland. Ms Fitzgerald briefed her ministerial colleagues following on from the terrorist actions in Paris last week.

Ms Fitzgerald told an Oireachtas committee last summer gardaí were aware about 30 suspected jihadis had travelled from Ireland to take part in various conflicts since the start of the Arab Spring. Sources said that figure has not changed significantly.

It is also understood gardaí have found no evidence Dublin Airport is being used as a significant transport hub for prospective jihadis travelling to places such as Syria. The most common route into Syria is to fly into Turkey and then cross the border by road.

In a statement after the Cabinet meeting, Ms Fitzgerald said “the Government will continue to co-operate fully with its international partners . . . Our efforts will be underpinned by the Terrorist Offences Bill . . . The legislation will criminalise provocation to commit a terrorist offence, recruitment for terrorism and training for terrorism . . . The threat does not come from particular religions or communities. It comes from terrorists.”

The Department of Justice said Ms Fitzgerald “has been advised that there is no specific information to suggest a threat to Ireland”.