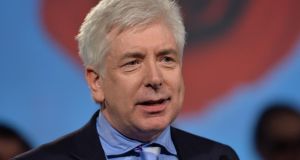 Minister for Communications Alex White: “It’s one of those things we have been talking about for a long time and we are now at the point that is capable of delivery.” Photograph: Alan Betson/The Irish Times

Minister for Communications Alex White says the new national postcode system – known as Eircode – will be introduced in early 2015. Mr White has told The Irish Times legislation may need to be introduced to address some concerns that the new codes may compromise the personal data of individuals. However he said that notwithstanding the need for a new law, the long-awaited project could be delivered early next year “and I would hope to do that”.

“It’s one of those things we have been talking about for a long time and we are now at the point that is capable of delivery.”

Ireland is the only country in the EU and OECD that does not have a national postcode and the Government project to address this anomaly has been under way for eight years. It was initiated in 2005 when Noel Dempsey was minister for communications.

After a public procurement process began in 2011, Capita was announced as the company that would develop and operate the new national postcode system. The new code is seven characters, with the first three characters (a mix of letters and numbers) identifying a general area or routing key in which the address is located. The remaining four characters (again a mixture of letters and numbers) will be randomly allotted and will help pinpoint the address.

The new system will give a unique code to every postal address in Ireland, including individual apartments. Until now, the only region in the country that has had postal codes has been Dublin and those codes will be incorporated into the first three digits of the code. Dublin 7 will be D07 and Dublin 6W will be D6W. However, the letters used for other locations around the country will be neutral and initials will not be used. For example, G will not be the initial letter for locations in Galway.

A briefing paper prepared for the Minister has claimed widespread support from the public and business for the codes. “The postcodes project is expected to cost around €16 million, as it is developed and rolled out over the next two years, and there will be a cost of about €1.2 million a year for the remainder of the 10-year licence,” it states.

The briefing does note that the Data Protection Commissioner’s Office has had “some concerns”, but department officials have assured Mr White the concerns are being addressed. Concerns have also been expressed that the system chosen is not as ambitious as the one envisaged in 2005.

There have been claims of a lack of geolocation capabilities, which will render the system of limited use to services other than the postal services, including freight operators.