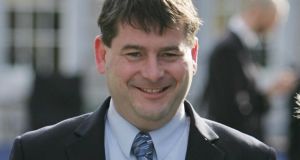 Minister of State for data protection Dara Murphy has expressed “serious concerns” about the implications for Ireland of a US case in which Microsoft is fighting a request to hand over data based in the State. Photograph: Bryan O’Brien/The Irish Times.

Minister of State for data protection Dara Murphy has expressed “serious concerns” about the implications for Ireland of a US case in which Microsoft is fighting a request to hand over data based in the State.

Mr Murphy said a US District Court Judge had decided to lift a stay on the execution of a criminal search warrant for email content stored by Microsoft’s servers in Dublin. The case centres on the prosecution of a drug trafficker.

“I am monitoring this case very closely and will be seeking the advice of the Data Protection Commissioner as well as the Office of the Attorney General on the implications of this latest ruling,” he said.

Mr Murphy said the possible implications of the ruling were “very serious” for Ireland and the European Union. Compliance with the warrant may result in Microsoft, and any other US companies with operations in the EU which are served with such warrants in the future, being in breach of the Irish Data Protection Acts and the EU Data Protection Directive, he said.

“This would create significant legal uncertainty for Irish and EU consumers and companies regarding the protection of their data which, in this digital age, is everyone’s most valuable asset.”

As previously reported by The Irish Times, former minister for justice Michael McDowell was retained by Microsoft, which submitted a four-page legal opinion by Mr McDowell in the New York court in June.

“The government cannot seek and a court cannot issue a warrant allowing federal agents to break down the doors of Microsoft’s Dublin facility,” Microsoft’s lawyers pleaded in court documents.

Mr Murphy said he met with the European Commission’s legal advisor on data protection in Brussels on Monday to discuss the implications for the Data Protection Directive “and the paramount importance of ensuring that the EU data protection environment is fully respected”.

He said he would also be discussing the implications of this Court ruling with the both US Chargé d’Affaires and the American Chamber of Commerce in Dublin with a view to informing the Government of appropriate courses of action.

“Ireland and the US enjoy an excellent working relationship in the area of law enforcement and a Mutual Legal Assistance Treaty in Criminal Matters between Ireland and the US has been in force since 2001,” he said.

“This provides for the due process to be followed for the request, and transfer of data in criminal matters. Cooperation in the area of law enforcement is a fundamental element of our international relations, in particular with our partners in the US, which is why the issue of the transfer of the data itself is not objectionable, but rather the process that is being utilised.”

He said Ireland had to ensure that its data was afforded the maximum protection available and only transferred to other jurisdictions after the process set down in the Mutual Legal Assistance Treaty had been followed.