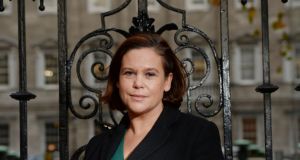 Speaking to The Irish Times during Saturday’s water charges protest, the Dublin Central TD said she believed it was widely accepted that all of the IRA departments had been disbanded and that the organisation had “gone away”.

“It’s 1994 since the first ceasefire, we’ve been through the whole issue of decommissioning and the weapons being put beyond use, the final statement of a ceasing of operations,” she said.

“This is absolutely bizarre, for so-called leaders such as Micheál Martin and Joan Burton to be so absolutely irresponsible and so cravenly opportunistic in their public pronouncements.”

The PSNI chief constable was giving his assessment of the situation after it was alleged that there was an IRA connection in the murder of Kevin McGuigan in Belfast.

“There’s politicking going on amongst the unionists as well, the UUP are playing for advantage over the DUP and I think the DUP recognise that too.”

With talk of a general election mounting, a number of prominent Fianna Fáil members have appeared to open the door to a possible coalition with Sinn Féin, but Ms McDonald poured cold water over any such prospect due to the parties’ divergent political ideologies.

“That would be a decision for the Sinn Féin Árd Fheis, I think we’ve made clear that we want an alternative, progressive, left-of-centre government. I don’t see Fianna Fáil forming a part of that.”

Fianna Fáil TDs John McGuinness, Colm Keaveney and Éamon Ó Cuív have all refused to rule out forming a coalition with Sinn Féin if necessary.

However, fellow deputy Niall Collins later insisted there is “no way” such a partnership would occur.