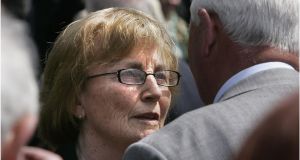 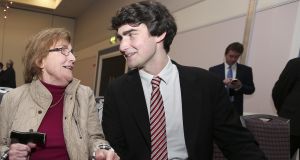 Ann Lenihan with Jack Chambers in early 2015 when he was selected by Fianna Fáil to contest the next general election in Dublin West for the party. File photograph: Conor McCabe Photograph 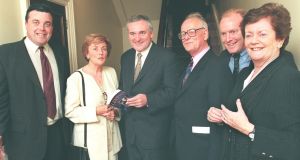 It is reported Ms Lenihan died in the Mater Hospital in Dublin.

Former Fianna Fáil TD Mary O’Rourke, her sister-in-law, had previously described Ms Lenihan as a very spiritual person who had endured a lot of suffering in her lifetime.

Speaking at the time Brian Lenihan jnr’s illness first came to public attention, Ms O’Rourke commented that Ms Lenihan had seen the death of her husband Brian, and of another son, Mark, who died of leukaemia.

She was the matriarch of one of the country’s most famous political families.

Brian Lenihan snr, who she married in 1958, served numerous terms as a minister and was appointed tánaiste in 1987.

“Ann was a loving wife who provided tremendous support in a family that gave much to public service in this country.

“She had a strong sense of service and civic duty which she instilled in each of her children. Ann had a positive outlook on life and always provided encouragement to those around her.”

Life under Level 4: What restrictions will look like if lockdown is eased 13:55
Ireland still ‘very vulnerable’ with ‘exceptionally’ high levels of Covid-19 in over-85s, Nphet warns 13:55
Students who sat postponed Leaving Cert to get results next Tuesday 13:42
Josh Dunne murder: Gardaí wish to speak to two food delivery men 13:38
Donnelly admits unlikely 700,000 people will be vaccinated by end of March 12:55