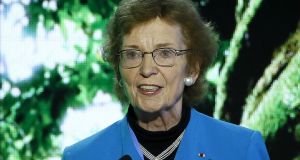 Former president of Ireland Mrs Robinson said she was very struck by the marked focus on the impacts of climate change on people and vulnerable societies in the addresses of leaders on the opening day of COP21.

Speaking to The Irish Times, she said she hoped that this people-centred focus would carry through to the negotiations.

“The problem is that unless those heads of State say it expressly to the delegations [from their countries], it may not carry down. We may be back to the same not-so-people-centred approach of the past.”

Mrs Robinson said her optimism was founded on a lot of preparation being done before this summit. She pointed to 180 countries having made commitments, in addition to further promises on climate finance.

Man in his 40s dies after two-car crash on N7 in Dublin 09:24
Gardaí break up rave attended by 60 people at Dublin flat complex 08:51
Concern over rise in Covid-19 cases in Louth, Donegal and Waterford 08:38
Dublin restaurateurs praise ‘amazing’ support from customers 06:55
Cork City FC leads tributes to man who drowned near Youghal 06:39