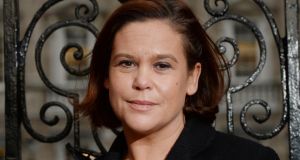 Mary Lou McDonald: said she had never been in Australia before, but anyone who had understood the “sheer distances involved”. Photograph: Alan Betson

“Yes, we travelled over by business class and yes I returned by business class. It cost €4,000, the ticket, which is expensive,” she said as her party’s two-day think-in got under way in Termonfeckin, Co Louth, yesterday morning.

Ms McDonald and her party leader, Gerry Adams, were heard greeting each other with the casual Australian expression “G’day” before they took questions from the media.

“This was paid for by party funds. There’s no taxpayers’ money involved. To be honest with you, given just how gruelling the schedule was . . . I was very glad that those who organised the trip had the foresight to afford me that level of comfort.”

Ms McDonald said she had never been in Australia before, but anyone who had understood the “sheer distances involved”. She said the trip was extremely successful and worth undertaking.

Before leaving for Australia, Ms McDonald said she would be talking to Irish workers on temporary visas in Australia about their rights in the workplace, and promoting trade union membership among the Irish community.