Margaretta D’Arcy says politicians should be challenged over Shannon 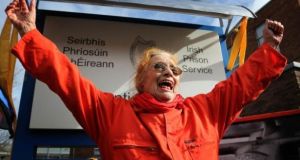 Margaretta D’Arcy is released from Mountjoy prison, in Dublin, in 2014. Photograph: Nick Bradshaw

Activist and artist Margaretta D’Arcy has urged voters to question general election candidates over their position on the use of Shannon airport by the US military.

Ms D’Arcy (81), who is a member of Aosdána, said political candidates and politicians “have to be challenged” over Shannon airport’s use for refuelling by US military and CIA-leased aircraft

Ms D’Arcy, who was speaking in Galway on Saturday at the publication of her new book, Ireland’s Guntanamo Granny, said the Dáil has “never fully debated the use of Shannon by the US”.

She said it was in contravention Article 29 of the Constitution.

Although the US Bush administration assured the Irish government that Shannon had not also been used for rendition flights, carrying prisoners between torture centres, several former justice ministers have since conceded this assurance was impossible to verify.

“The Irish government puts the interests of its allies above the freedom and safety of the Irish people,”she said.

Referring to her imprisonment over her opposition to the use of Shannon, Ms D’Arcy referred to the conditions experienced by women in Limerick prison who were and are kept like “caged birds”, she said.

Ms D’Arcy was jailed twice in 2014 for refusing to sign a commitment to keep away from unauthorised zones at Shannon Airport. She served nine-and-a-half weeks of her first three month sentence, and was released five days early from a second two-week term in the same year.

She was undergoing treatment for cancer at the time, and was, at one point,visited by close friend Sabina Coyne, the wife of President Michael D Higginss, in a private capacity.