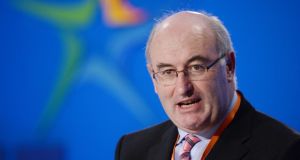 Minister for the Environment Phil Hogan who published legislation that will, if passed, almost halve the number of councillors in the country and will also scrap the 80 town councils. Photograph: Alan Betson/The Irish Times

Legislation which will result in the biggest change in local government structures has been published by Minister for the Environment Phil Hogan.

Mr Hogan announced details of the Local Government Bill at a press conference in the Custom House in Dublin this morning.

The Bill will almost halve the number of councillors in the country and will also scrap the 80 town councils which have been in existence for 115 years.

The abolition of town councils accounts for the massive reduction in councillors - down from 1,627 to 949.

In addition, the two councils in each of these counties; Tipperary, Waterford and Limerick - are being merged into one.

To compensate for the loss of town councils the new law has provided for the establishment of new municipal districts, made up of county councillors from that area.

Another compensation mechanism will see the number of county councillors in more populous counties being increased.

Mr Hogan said this morning he was giving councillors a wide range of powers to make the municipal districts they have been assigned to more effective.

A total of 70 reserved functions will be given to councillors working at municipal district level.

Another major provision of the Bill will allow a plebiscite for the citizens of Dublin to allow them decide if they want a directly-elected Mayor.

Mr Hogan argued this morning the changes would devolve power from central Government back to local and regional level.

He said a major component of this was that 80 per cent revenues raised from the property tax will be ring-fenced for local authorities.

From 2015 councillors would have the power to vary the revenue to suit local needs.

“This is the first time in over a century that we have attempted such a radical reform but I am convinced that it is necessary to bring our local government system up to date,” said Mr Hogan.

His views were echoed by Labour Minister of State Jan O’Sullivan who said the new law would transform local government.

Another step-change is the change in status of senior management in local authorities. The role of county manager or city manager is being scrapped to be replaced by a chief executive with specific duties and responsibilities.

Existing managers will change their role to chief executive once the law is enacted.

The number of municipal districts is 137 with the membership and configuration determined at council level.

Mr Hogan confirmed that those councillors who positions are being abolished will be entitled to gratuities and termination payments.

The law will be enacted ahead of the local government elections next summer.