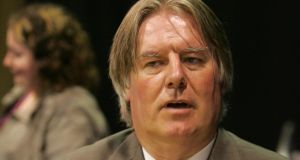 Tommy Broughan: said he welcomed the document and was considering it

A group of left-leaning Independent TDs are to meet next week to discuss the possible establishment of a loose alliance after they consider a draft charter setting out its potential direction and principles.

The document is from a group calling itself “Independent Thought – United Vision” and is authored by Independent TDs John Halligan, Catherine Murphy and Thomas Pringle.

Local elections
Mr Halligan said it was an attempt to bring the Independents together, and did not rule out allowing local election candidates run under its banner.

The document has been sent to TDs who expressed an interest late last year in forming an umbrella group, such as Labour rebels Róisín Shortall, Tommy Broughan and Patrick Nulty. A meeting will follow in the coming days to discuss what steps interested TDs should take next.

The Irish Times first reported in November that discussions were taking place about establishing the group.

Mr Broughan said he welcomed the document and was considering it, describing it as “very impressive, with fine aspirations which a lot of people on the left of Irish politics would share”.

While the group would be similar to the Reform Alliance in its “modus operandi”, Mr Broughan said any left alliance would be different because the potential members would not be drawn from the same party.

The seven-page document sets out a number of principles including equality, democracy, community, sustainability, solidarity and human rights and was also sent to Finian McGrath, Stephen Donnelly and Shane Ross.

“We envisage that those subscribing to this charter will be people who have an understanding of issues on the ground in communities throughout Ireland, ” it says.

“As Independents we agree to work together for the improvement of society with a vision of making the State more responsive to the needs of citizens. In agreeing to work together we believe that our common aims will ensure our cohesiveness thus eliminating the need for a ‘whip system’.”