Lack of women in politics highlighted in official report

Gender-based violence described as ‘persistent challenge’ by Department of Justice 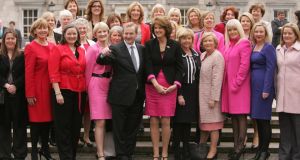 TDs and Senators with Taoiseach Enda Kenny on the plinth at Leinster House to celebrate International Women’s Day 2012. A new report says there are far too few women in politics. Photograph: Alan Betson/The Irish Times

The Department of Justice has reported to the United Nations that there are too few women in politics and other decision-making roles in Ireland.

In a gender equality report submitted to the UN’s Economic Commission for Europe, violence against women is described as a “persistent challenge” in Ireland.

The document also points to “gender segregation” in both education and the work force, “which may be impacting on the advancement of women into decision-making roles and on closing the gender pay gap”.

The gender pay gap in Ireland is said in the report to be 14.4 per cent, “slightly better than the EU average”.

“Despite their high level of educational attainment, women in Ireland remain underrepresented in many decision-making roles, most notably in politics,” the report states.

The report says increasing women’s representation in politics is a “key target” of the Government, referring to a quota law that will halve State funding to parties unless 30 per cent of candidates are women at the next general election.

However, women’s progress in the legal profession is emphasised: “the Chief Justice, Attorney General and Director of Public Prosecutions and Head of the Forensic Science Service are all women, as is the acting Commissioner of An Garda Síochána”.

The report says violence against women, in particular domestic violence, emerged as a “major policy issue” in the 1990s.

In the education sector, the report highlights “challenges” in relation to women’s educational choices, “which can impact on their employment choices and possibly also on their advancement into the most senior decision-making roles in employment, particularly in industry”.

About 80 per cent of primary graduates in both “education” and “health and welfare” were women, while women accounted for only 41 per cent of graduates in “science, mathematics and computing”.

In compiling the report, the Department of Justice and Equality consulted with Government Departments and the National Women’s Council of Ireland, the umbrella organisation for over 180 women’s groups.