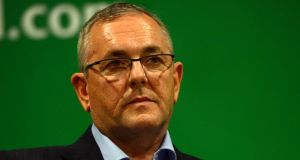 John McGuinness: the Taoiseach claimed the affair was “damaging” for the chairman of the Public Accounts Committee

Taoiseach Enda Kenny weighed in against Public Accounts Committee (PAC) chairman and Fianna Fáil TD John McGuinness for claiming a case can be made for the State to pay the travel costs of Ministers’ spouses on official business.

Amid allegations in Fianna Fáil of dirty tricks by the Coalition to undermine Mr McGuinness, party leader Micheál Martin defended the TD.

Ahead of the committee’s next meeting on Thursday, Mr McGuinness is under pressure from Government TDs on the committee to explain himself.

The conflict follows a newspaper report that he tried to bring his wife Margaret Redmond with him on a trade missions to Dubai and Canada when he was minister of state for trade and commerce between 2007 and 2009. His wife did not ultimately travel. Although he was reported to have argued that the State should foot the bill, Mr McGuinness said on radio that he clearly expressed his willingness to pay for her.

While acknowledging his wife travelled at the State’s expense on St Patrick’s Day missions, he went to say an argument could be made for the State to pay for spouses to travel on other business.

“There are circumstances that should be considered where Ministers are away for long periods of time where they believe that their wife should travel and they should pay. There may be other circumstances where the Minster can then make a case within a new set of guidelines where be believes the State should pay,” he said.

“In my opinion work practices have certainly changed. Family are now central to everything and it may be that a Minister might want to make that case around his wife or spouse and around his family.”

As Fianna Fáil braces for the possibility of a confidence vote at the committee in Mr McGuinness’ chairmanship, Mr Kenny said in Italy that the affair was “damaging” for Mr McGuinness.

“I haven’t seen all the details of this but it leads me to believe that it smacks of traces of the abuse and arrogance that we inherited after 14 years of mismanagement,” said the Taoiseach.

“I know I’m in Rome and the old saying is that Caesar’s wife has to be above reproach, this is the Public Accounts Committee, it is a matter of credibility in respect of politics and accountability.”

Fianna Fáil said it had nothing to add to remarks by Mr Martin in which he said he had watched with growing alarm as a campaign has developed to undermine the position of “one of the final and most important elements of independent Oireachtas scrutiny of this Government.”

Mr Martin added: “It has always been an accepted principle that the role of Chair of the PAC was above politics and that all parties would respect the independence and impartiality of that role no matter what parties were in government.

“The only appropriate test was whether the individual who held the role was exercising their authority in an independent, transparent and non-partisan way.

“No one, from any corner of politics or the media has questioned John McGuinness’ performance as chair of the PAC committee in this regard.”

Fine Gael TD and PAC deputy chairman Kieran O’Donnell called on Mr McGuinness to make a comprehensive statement to the committee when it meets on Thursday.

“The vital work that the PAC does in the public interest must continue unencumbered by unnecessary distractions,” said Mr O’Donnell. “My main concern is the integrity of the committee and its workings. And remember: this committee is the public’s watchdog on State spending.”

Labour TD Robert Dowds, a member of the PAC, said Mr McGuinness’ chairmanship was damaged but stopped short of calling on him to consider his position.

“I think he didn’t actually spend taxpayers money on his wife and that’s why I want to go no further that that,” Mr Dowds said. “Clearly the chair of the PAC must be above reproach at all times in terms of how taxpayers’ money should be spent. In my view it’s not appropriate to bring a spouse at State expense for overseas visit. Really the chairman of PAC needs to have a strong sense of ethics in terms of how taxpayers’ money is used.”