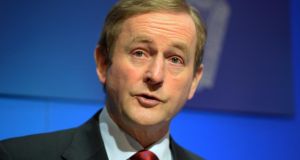 Enda Kenny: two of his key election strategists have left his side in recent months. Photograph: Eric Luke

Taoiseach Enda Kenny has begun the preparations for Fine Gael’s general election campaign by choosing Minister for Justice Frances Fitzgerald as the chair of a committee to drive preparations for the party to face the polls.

Mr Kenny made the announcement to his TDs and Senators at the Fine Gael parliamentary party think-in at the Fota Island resort in Cork, which also saw discussions on the economy and health.

Ms Fitzgerald will chair the national strategy committee, which brings the Dublin Mid-West TD closer to Mr Kenny’s inner circle in the party.

With the resignation of Frank Flannery and the nomination of Phil Hogan as EU Agriculture Commissioner, two of the Taoiseach’s key election strategists have left his side in recent months.

It led TDs senators and party figures to question who would take over from Mr Flannery and Mr Hogan as senior party strategists. However, Mr Kenny told the parliamentary party at a behind-closed- doors session that Ms Fitzgerald would head up the newly established national strategy committee.

“It is new and no other members are confirmed as yet,” a party source said, adding that it was expected that the new body “will include people representing all areas of the party”.

Another party strategist, Mark Mortell, was also at the think-in and played a prominent role in its organisation. Mr Mortell has long been a key member of Fine Gael’s election planning, and was credited with steering its 2011 general election success.

“We were wondering who would replace Phil and Flannery,” said one deputy. “Now we know – Frances and Mortell.” Mr Kenny also said the Government would run its full term, until spring 2016.

Also at the think-in, Minister for Health Leo Varadkar said he didn’t mind “being slapped down or scolded”, adding that he “absolutely” followed Mr Kenny’s leadership.

Minister for Finance Michael Noonan said he had spoken to Mr Varadkar about his comments that the Government could give €5 or €10 back to people in the budget.

Ministers were questioned by the media about Mr Kenny’s rebuke of Mr Varadkar in recent days. Mr Kenny himself said it was important that ministers work towards Government policy, and refrain from making public statements on the budget. When asked if he had apologised to Mr Kenny, Mr Varadkar replied: “That’s not quite the case.

“The Taoiseach was very clear that he doesn’t want ministers to be speculating about the details of the budget and he’s totally right about that.

“But at the same time I’m the Minister for Health. I believe I have a responsibility to defend health services and I am going to continue to do that, and as well as that I am very committed to health sector reform, but that has to happen in a way that is workable and deliverable, and I think the Taoiseach understands that very well.”

Mr Noonan said what Mr Varadkar “was trying to communicate was we have very little scope” for tax relief. “His figures were illustrative rather than any prediction about what might be in the budget.”