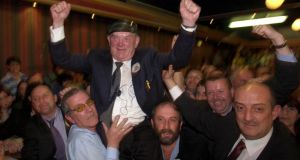 He was a member of Fianna Fail for decades, but broke with the party in 1997 when he failed to get a nomination to contest the general election in the Kerry South constituency. He won a seat as an Independent and held it until 2011, when he made way for his son, Michael, who was elected to replace him.

Healy-Rae’s 1997 victory, at the expense of Fianna Fail, was sweet political revenge, when he became one of the Independents whose support was sought by then party leader, Bertie Ahern, to form a government.

As was the case in 2007, when his support was again sought by Ahern, his price was a list of constituency projects focusing on roads, schools, piers, harbours, sewerage schemes, assistance to farmers in a fodder crisis, as well as access to ministers on routine issues.

Allegations of parish pump politics were dismissed by Healy-Rae, who pointed out that he was providing for his constituency as the late Tony Gregory had done for Dublin Central as an Independent TD in the early 1980s.

The trademark cap and distinctive turn of phrase were part of Healy-Rae’s political armour, sometimes securing him publicity that might not otherwise have come his way. He was capable of deliberately playing to the caricature of the traditional rural TD, happy that it was securing him media exposure and, as far as he was concerned, allowing him to have the last laugh.

He was not beyond hamming it up when confronted by a media posse, as was the case when he was an Independent TD keeping the government in power in the run-up to the IMF arriving in Dublin.

Alighting from a taxi outside Leinster House, he was asked if he would continue to support the Fianna Fail-led coalition. “I don’t know what is going on,” he declared. “I’m just up from the bogs of Kerry.” He knew the soundbite would feature in the evening news bulletins.

He was born John Patrick Healy, in Kilgarvan, Co Kerry, the first of six children, and grew up in a small farm. The Rae part of his surname derived from the local townland at a time when this was a common practice to distinguish families of the same name in rural areas.

The early 1950s were a bleak time in rural Ireland for young men and, like thousands of others, he emigrated to the United States in 1953. But he did not stay long, returning to eventually establish himself in the plant hire business. In the late 1960s, he also set himself up as a publican in Kilgarvan.

He played hurling and football for Kilgarvan and was a member of a local dance band, playing the saxophone. As a TD, he played the saxophone on RTE’s Late Late Show.

He was an active grassroots member of Fianna Fail throughout the 1960s, participating in hard-fought byelections where Fianna Fail victories were achieved under the guidance of the party’s then senior minister Neil Blaney. It would prove to be invaluable experience when Healy-Rae ran as an Independent for the Dail many years later.

The first byelection was in his native Kerry South in 1966, which was an important electoral test for newly-elected Fianna Fail taoiseach Jack Lynch. As the party’s candidate John O’Leary won the seat, Healy-Rae was already making a name for himself as an effective campaigner.

Charlie Haughey, then a senior Fianna Fail minister, was among those to spot his potential. “You’d better keep your finger on this fellow,” he said to Blaney. “He’ll be a very good man for byelections.”

Other Fianna Fail TDs elected in byelections in the ‘60s included Gerry Collins and Des O’Malley, in Limerick, who would later go on to serve as ministers. One of Healy-Rae’s responsibilities in those intensely political contests was organising the torchlit processions which featured cans containing blazing sods, sometimes shaped like goalposts.

Healy-Rae’s political career began with his co-option, and later election, to Kerry County Council in the 1970s, and he also served as Fianna Fail director of elections in Kerry South in general elections.

In the Dail, the Blaney link was restored when he worked closely with Neil Blaney’s brother, Harry, representing Donegal North East, who was among the Independents supporting an Ahern-led government.

A structure was put in place whereby the Independents would meet regularly with the chief whip and the taoiseach if necessary. Healy-Rae’s constant focus was the welfare of his constituents in Kerry South.

Always a pragmatist, Healy-Rae was prepared to concede defeat on an issue if he felt it was not worth pursuing it to the point where he might withdraw support and leave the government vulnerable to collapse. In an interview in 2000, he recalled failing to persuade Ahern to extend pub opening hours by a half-hour on Sunday nights.

“Bertie said we were a people recognised for being late for work on Monday, and he did not want to add to that,” said Healy-Rae. The matter was dropped, he added, “because you couldn’t have newspaper headlines about the Government falling over pub-closing time on a Sunday night”.

In retirement, Healy-Rae continued to take an active interest in politics, observing something of a family dynasty emerging. Apart from TD Michael, another son Danny and grandson Johnny are members of Kerry County Council.