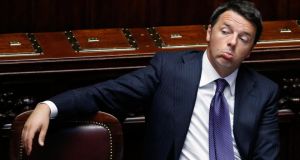 Senior Irish officials believe an Italian-led push for a loosening of European budget rules may open up potential for a modest easing of the Government’s fiscal path in the medium term.

In question now is whether EU leaders seek to draw a distinction between day-to-day spending and expenditure on long-term investment when examining each other’s budgets.

While high-level figures in the Coalition see no scope to dilute the EU-mandated deficit target in the October budget, Italy’s demand for more budgetary flexibility has reignited debate on whether the enforcement of strict fiscal rules should be relaxed to stimulate economic growth.

The Irish view remains that there is no appetite in Berlin for any fundamental shift away from the strict measures adopted to enforce budget discipline after the outbreak of the sovereign debt crisis.

The advancing discussion comes as EU leaders prepare at their summit tomorrow in Brussels to nominate former Luxembourg premier Jean-Claude Juncker as president-elect of the European Commission, in defiance of British objections.

“My firm expectation then is that Jean-Claude Juncker will be confirmed as that nominee and will go on to be endorsed as president of the new European Commission by the European Parliament,” Taoiseach Enda Kenny told the Dáil yesterday.

Mr Kenny and his European counterparts gather today in Flanders for commemorations to mark the centenary of the start of the first World War. They will have dinner tonight in Ypres, scene of some of the bloodiest fighting, and resume political business in Brussels tomorrow morning.

The build-up has been dominated by London’s resistance to Mr Juncker’s appointment, but an isolated British prime minister David Cameron appears set to lose. At issue in pre-summit talks between diplomats is whether a draft document setting out priorities for the EU for the next five years should be amended to incorporate the possibility of allowing a distinction between current and capital expenditure.

This was said last night to be the subject of a diplomatic “tussle” as Italy and allies such as France seek greater recognition of the requirement for budgetary flexibility while Germany argues this is included in the existing rules.

In Government circles, the debate is seen to open up the possibility of measures down the line to make it easier for Ireland to meet its obligations under the fiscal treaty in the latter part of the decade

Although growth projections suggest such obligations might be met without the radical retrenchment undertaken since recession struck, the debate is seen to offer the potential to boost public investment for the purposes of job creation without breaching deficit guidelines.

It remains unclear whether any political declaration at the summit will be followed with actual measures to change the application of budget law.

1 Swedish expert backtracks on herd immunity for Ireland
2 Rising Covid-19 infections among older people ‘a grave concern’, NPHET warns
3 Sweden and coronavirus: how has the outlier of Europe fared?
4 Miriam Lord: Micheál has Mary Lou pegged as a street angel and House devil
5 Cult leader who claims to be reincarnation of Jesus is arrested in Russia
Real news has value SUBSCRIBE