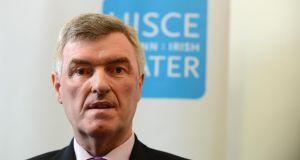 The State funds spent on Irish Water will have to stay on the exchequer balance sheet until 2020, under a decision by Eurostat, the EU statistics agency.

The ruling is a blow to the Government’s strategy on water investment, and will mean that a hoped-for boost to the 2016 budget figures will not now emerge.

Responding to the decision on Tuesday, Minister for Finance Michael Noonan said there will be no budgetary implications and insisted the charges will not change for customers.

Mr Noonan said there was “no crisis” but admitted it would have been preferable for the funds to be off-balance. He said there will be no budgetary affect and he will still have €1.2-€1.5 billion to play around in October’s Budget and customers charges will not change.

The Minister said the national debt could have been reduced by €600 million but insisted that was “marginal” in the overall scheme of things.

However, Mr Noonan admitted it would have been preferable if company had passed the Market Corporation Test.

The ruling on the so-called market corporation test says Irish Water must remain on the State’s balance sheet, for the moment at least, meaning the money spent on it will count towards the annual deficit and national debt as measured for EU targets.

The Central Statistics Office in Ireland is understood to have made a strong recommendation that Irish Water qualify as a market corporation.

The reasons for the Eurostat ruling are not clear, but are likely to centre, in part at least, on the €100 annual grant that the Government agreed to pay to households that signed up for Irish Water.

While the Government argued this money was separate from the financing of Irish Water, Eurostat may not have agreed. The initial ruling is likely to hold until 2017 at the earliest.

He said Eurostat was completely independent from any Government and it will decide when to publish the findings.

The ruling is likely to fuel the debate about Irish Water and the issue of water charges as the establishment of the company was based in part on the goal of getting its finances off the State balance sheet.

This meant the annual government spending on Irish Water would not count when the EU calculated Ireland’s deficit and debt each year, giving more scope to invest in water and in other areas, without breaching annual borrowing limits.

Despite the Eurostat decision, the budget forecasts made in the Government’s spring statement still stand.

Because there was no ruling made at the time by Eurostat, the Government decided to include Irish Water spending on the State books for the purposes of the forecasts.

So the expected leeway in the Budget for tax cuts and spending hikes remains at the €1.2 billion to €1.5 billion outlined in the statement, and forecasts for future years also remain unchanged.

If Irish Water stays on the balance sheet in subsequent years, it will mean that the annual deficit is 0.2 per cent of GDP higher each year than it would otherwise have been.

With the State finances ahead of target, the ruling is unlikely to have a major impact on the 2016 budget, but it will lessen room to invest in other areas in future.

The Eurostat test will be undertaken periodically and any decision could be changed. The decision was due to be known in April but it was delayed.

The findings are expected to be issued today.

A report by the European Commission earlier this year voiced serious concern about whether the public utility can fund itself into the future.

It had warned the revised water package announced by the Government had diminished the prospect of the company being self-sufficient and this is likely to have been a key factor in the Eurostat ruling.