Irish designer of the submarine remembered on the Boyne 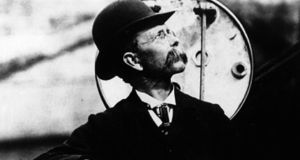 Take a former Christian Brother with a passion for Jules Verne, the Fenian Brotherhood’s passion for an independent Ireland, and the US navy’s passion for maritime supremacy, and what do you get? The first successful submarine, known as the Fenian Ram, a model of which is to be unveiled in Drogheda, Co Louth, today.

Clare and Cork have already laid claim to their connections with John Philip Holland (1841-1914), the Liscannor man who designed the first submarine that actually worked.

However, the town on the Boyne estuary is also keen to commemorate his achievement, as it was here he taught mathematics and music at a monastery in Palace Street.

A good two decades before French author Jules Verne published his Vingt Mille Lieues Sous Les Mers – (20,000 Leagues Under the Sea) in 1870, Holland was sketching out plans for a vessel that might work above and below the surface of the sea.

The concept wasn’t new: ancient Greeks tried out diving bells and a Dutchman named Cornelius Drebbel is credited with building a wooden boat, covered with waterproof leather and propelled with oars, that was tested at a four-metre (13ft) depth in London’s river Thames.

At the outset of the American Revolution in 1776, a craft called The Turtle , invented by David Bushnell, was used to try and sink the British warship Eagle in New York harbour. However, copper sheathing on the ship’s hull is said to have scuppered its attempt to screw a gunpowder charge in place.

Holland, whose father had patrolled the west coast looking out for French invaders for the British coast guard, is said to have been inspired by Brother Dominic Burke, who taught him science at school in Limerick.

When he joined the Christian Brothers, he was given the religious name “Philip”, and came to Drogheda to teach.

“Who knows what influenced him when he was here,” says Martin McGowan, owner of the Scholars Townhouse and restaurant, which is located in the former Christian Brothers monastery.

Local historian Seán Collins says that during his time in Drogheda he designed and constructed a “mechanical duck, resembling an ordinary duck that could swim, dive and come to the surface”.

In 1875, Holland emigrated to north America, leaving the religious order for a teaching post in Paterson, New Jersey. Four years later, he built the Holland I, a petrol-driven submarine weighing several tons, which was launched in the Passaic river.

Nine years and many designs later, the Holland 6 became the US Navy’s first commissioned submarine, run with electric and petrol engines. The Holland Motor Torpedo Boat Company was formed, and it worked on further constructions with the Electric Boat Company, bought up by the defence contractor General Dynamics Corporation.

The Irishman also sold submarines to the Japanese – earning a Rising Sun award – and to the Netherlands and Britain, but lost control of his business in a patent dispute.

He died in August 1914, relatively poor, and just weeks before HMS Pathfinder became the first ship to be sunk by a torpedo fired by submarine – and nine months before a German U-boat set its sights on the Lusitania.

“Drogheda is known for St Oliver Plunkett, for Oliver Cromwell, but it’s about time we celebrated this connection,” he says.

The memorial sculpture was cut from grey limestone by McConville, who did some research into the cigar-shaped design.

“Holland made a wax model of it beforehand, and it was powered by steam, so it must have been hell for the crew,” he says.

An accompanying plaque carries an image of the designer, along with historical background, and representatives of the US, British and Japanese embassies have been invited to today’s unveiling in the grounds of Scholars Townhouse.

It is one of a number of events, including a regatta and an international nautical mile stand-up paddle race, planned for this year’s Drogheda maritime festival on the Boyne.