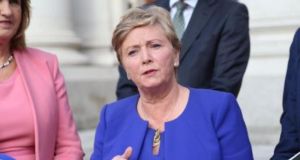 Minister for Justice and Equality, Frances Fitzgerald said refugees would start arriving in groups of 50 or 100 within weeks, with more coming before the end of the year. Photograph: Merrion Street

Ireland is to accept at least 2,900 more refugees and migrants fleeing to Europe’s borders. The increase coupled with existing commitments takes the total to about 4,000 with a series of reception and accommodation centres to be opened around the country over the coming weeks.

The decision was made at a special Cabinet meeting this morning to discuss arrangements for the arrival of several thousand refugees.

The State will now accept up to 2,900 additional persons on top of commitment earlier this year to take in 600 under the proposed EU relocation programme, and 520 programme refugees currently being resettled to Ireland under a previously-agreed scheme.

The scheme is to run for an initial two years.

Priority is to be given to unaccompanied minors, the Government said.

However, the overall number of refugees could rise to approximately 20,000 over the coming years as family members of each person with refugee status are entitled to arrive in Ireland under family reunification rules.

The average number of family members per refugee has been in excess of four in past programmes.

Minister for Social Protection Joan Burton said when family reunification was factored in the total number of refugees and migrants coming to Ireland would be “somewhat higher” than the 4,000.

“Let me make it clear, we will have a process of family reunification where that’s appropriate. Obviously, we don’t have a total estimate on those numbers but in previous programmes they are significant.”

The Tánaiste said women and children, including displaced children, would be prioritised. 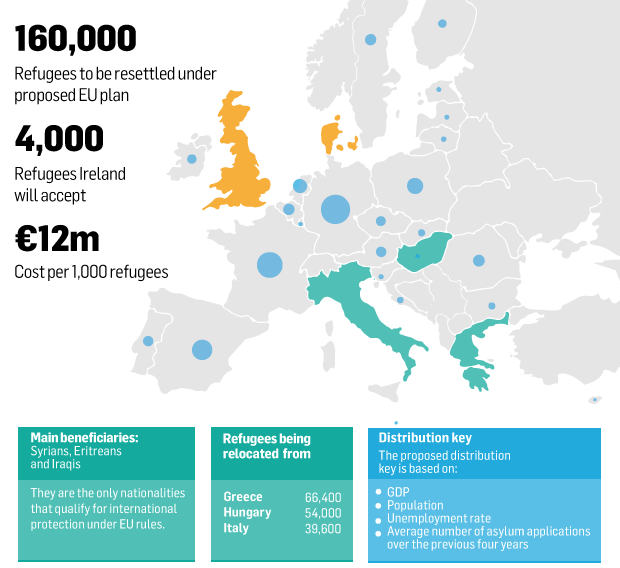 Minister for Justice Frances Fitzgerald said special arrangements were being put in place to care for children who arrive without parents, guardians or relatives. “Ireland has always lived up to its international humanitarian obligation and we are fully committed to playing our part in addressing the migration crisis facing Europe”.

“We have all been shocked and upset at the scenes witnessed in southern and central Europe and the distressing scenes during rescues in the Mediterranean. It is only right that we do all we can as a nation to help.”

The Cabinet agreed the establishment of a network of emergency reception and orientation centres, called the Irish Refugee Protection Programme, and assessments and said decisions on refugee status would be made within weeks.

The latest programme, which will be overseen by the Cabinet Committee on Social Policy, will provide integration measures including English language training to refugees. It will hold its first meeting within days.

Special priority will be given to the plight of unaccompanied minors and gardaí will liaise with European and international policing bodies to ensure appropriate vetting arrangements put in place for all new arrivals.

Ms Fitzgerald said the refugees would arrive in groups of 50 or 100 within weeks, with more coming before the end of the year.

While the cost for every 1,000 refugees is approximately €12 million, an initial budget of €6 million has been agreed for the first arrivals and the European Commission will be asked to exclude the monies spent on refugees from the national finances.

In a statement issued after this morning’s meeting, Ms Fitzgerald said: “Under this Programme, Ireland will offer a welcome safe haven for families and children who have been forced to leave their homes due to war and conflict”

Ms Fitzgerald brought a memorandum to the meeting, which will outline details of how the intake will be managed.

Minister for Public Expenditure and Reform Brendan Howlin said on Wednesday specific reception centres would be required to provide accommodation, orientation and assessment of medical needs.

Some differences became apparent between the Coalition parties earlier this week with Fine Gael saying a call from Labour leader and Tánaiste Joan Burton to accept 5,000 had not been agreed.

Thursday’s Cabinet meeting followed the publication of a relocation programme by the European Commission in its first major policy response to the migration crisis.

The plan aims to redistribute 120,000 refugees arriving in Hungary, Italy and Greece across the EU in the coming months.

Noting that only 0.11 per cent of the EU’s population are refugees, he said Europe was a continent whose own citizens had benefited from emigration to other regions of the world, citing the example of Scottish and Irish emigrants who had moved to the US.

The Government has called on the European Commission to clarify how funds will be allocated to meet the costs.

Other offers of accommodation have been made by voluntary groups, NGOs, charities and religious organisations. The Irish Red Cross is to be given a key role in preparing the centres for the arrival of refugees.

Everyone accepted into Ireland under the programme will be subject to biometric checks including fingerprinting, the Government said. Elsewhere, Ms Fitzgerald committed to clearing the backlog of asylum cases in Ireland.

She said new legislation to deal with the controversial use of direct provision centres for people seeking refuge and the ban on the right to work, welfare and education will be introduced in the coming weeks.