Ireland must do more to tackle corruption, EC warns 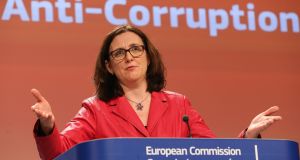 EU Commissioner for Home Affairs Cecilia Malmstrom during a press conference to launch the first Anti-Corruption Report, at the EU Commission headquarters, in Brussels, Belgium, on Monday. Photograph: EPA

Ireland has undertaken substantial reforms in tackling corruption but still must improve the speed at which it secures criminal prosecutions, a report by the European Commission has found.

It found that while Ireland had made substantial progress in improving transparency and accountability in matters related to public procurement, electoral funding and fraud, “corruption-related risks associated with close ties between politicians and industry continue to be a cause for concern”.

White collar convictions
In particular, it noted convictions for white collar crime in Ireland fell significantly between 2003 and 2010, even though the number of cases increased.

The length of time taken to progress investigations into the role of financial institutions in the banking crisis “contributed to a general climate of mistrust in the transparency and accountability of the financial sector in the country and in the capacity of corporate oversight and enforcement”, the report found.

The report, which also looked at the attitudes of European citizens to corruption in their country, found some 81 per cent of Irish people believe corruption is widespread, compared to an EU average of 76 per cent.

Some 3 per cent of Irish respondents said they had been asked, or expected, to pay a bribe in exchange for services over the past 12 months, compared to an EU average of 4 per cent.

A significant part of the report focused on the prevalence of tribunals of inquiry into Ireland in relation to issues of public procurement and local planning.

While the Mahon and Moriarty tribunals had been “a crucial catalyst for change, with profound implications for anti-corruption policy in Ireland”, the report highlighted the limitations of the tribunal system, emphasising that a tribunal is not a court of law.

“Consequently it can only investigate facts and make recommendations, rather than assign criminal or civil liability,” it said.

Political financing
As regards the financing of political parties, the report noted Ireland has made significant progress in the area since the adoption of the Electoral Political Funding Act 2012, although it said there was still room for improvement regarding transparency in local branch and third-party accounts. The lack of legislation on the funding of referenda was a concern, particularly in light of the high number of referenda in Ireland.

Noting Ireland’s history of corruption in planning and construction matters, the report recommends that “the effort to reduce incentives for corruption in matters relating to re-zoning of lands should be sustained”.

Among all 28 member states surveyed for the report, Nordic countries such as Finland, Denmark and Sweden were perceived by their citizens and companies as the least corrupt, while companies operating in Greece, Italy and Spain reported it to be widespread.

Launching the report in Brussels, the EU Commissioner for Home Affairs Cecilia Malmström said corruption is estimated to cost the EU €120 billion each year. “Corruption erodes trust in public institutions and in democracy,” she said.