Ian Paisley: Timeline of his life and career 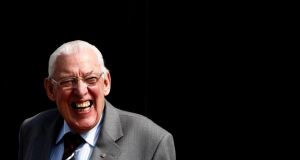 Dr Ian Paisley was probably the most fiery, uncompromising and bellicose Ulster politician throughout the North’s Troubles.

But late in life, one of the most turbulent figures in Northern Ireland politics throughout the 20th century underwent a transformation as he agreed to share power with Sinn Féin .

Here is a timeline of some of the main events in his colourful life and career.

June 1961. Ian Paisley comes to prominence as he leads a protest march against official sympathy messages and flags lowered to half mast for the death of Pope John XXIII

1971.Paisley co-founds the Democratic Unionist Party of which he is leader until 2008.

May 1974. The DUP leader leads opposition to the Sunningdale agreement including the loyalist workers strike which causes the collapse of the five-month-old power sharing administration

1979. Paisley is elected as a member of the European Parliament for Northern Ireland, a seat he retains until 2004. Among his most dramatic moments as an MEP came in 1988 when he was physically removed from the chamber for heckling the pope during his address, holding up a sign reading ‘John Paul II Antichrist’.

December 1985. In protest at the signing of the Anglo-Irish Agreement Ian Paisley resigns his Westminster seat (later re-elected). A month earlier he led an ‘Ulster Says No’ rally against the agreement at Belfast City Hall.

2003. The DUP becomes the largest political party in the Northern Ireland assembly as David Trimble’s UUP loses out. Ian Paisley claims the Good Friday Agreement was “dead and buried”. The DUP’s dominance continues in 2004 Westminster and 2005 local elections.

2006. Despite facing dissent in his party over the St Andrew’s Agreement Dr Paisley signals that he is prepared to enter power with Sinn Féin and that a powersharing agreement was possible in the timeframe set out by the British and Irish governments

February 2008. A controversy over Dr Paisley employing his son as a researcher while he also worked as an Assembly member and junior minister and questions over his son lobbying for property developer leads to the resignation of Ian Paisley Jnr as minister.

May 2008. Paisley steps down as first minister and DUP leader and is succeeded by Peter Robinson.

2010. Paisley steps down froom the House of Commons as an MP for North Antrim after 40 years. He was created a life peer as Lord Bannside in the House of Lords

January 2011 . Paisley, officially ends 65 years of ministry in a retirement service at the Martyrs Memorial Free Presbyterian Church in south Belfast. He also steps down from the Northern Ireland assembly in this year.

2012. Paisley was treated in hospital for an unspecified heart problem.

September 12th, 2014. Ian Paisley’s death is confirmed by his wife Baroness Eileen Paisley. He was aged 88.