Northern state papers 1987: how a private letter ended up in his mailbox is revealed 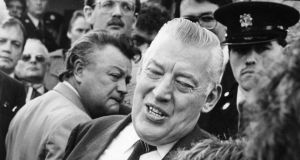 Rev Ian Paisley: the private letter from a Garda body in Dublin was addressed to the most senior Irish official at the Anglo-Irish Secretariat at Maryfield. Photograph: Peter Thursfield

The story of how a private letter from a Garda body in Dublin, addressed to the most senior Irish official at the Anglo-Irish Secretariat at Maryfield, ended up in the mailbox of the Rev Ian Paisley in 1987 is revealed in previously confidential files released today in Belfast.

The letter was from the Garda Síochána Benevolent Fund in Dublin.

The issue first emerged at a meeting between Michael Lillis of the Department of Foreign Affairs and Northern Ireland secretary of state Tom King, on February 11th, 1987, to discuss political matters.

Mr Lillis referred to “the story circulating yesterday about his donation to the Garda Pension Fund”. The secretary of state said he would investigate how the interception of the private letter might have occurred.

The issue became public on February 12th, 1987, when the Irish News reported that the personal letter to Mr Lillis from the Garda Benevolent Society had “ended up being delivered to the DUP leader, Ian Paisley”.

The letter gave the address of the Irish diplomat as “Anglo-Irish Secretariat, Belfast” and acknowledged receipt of a donation of £150 to the fund.

Dr Paisley sent photocopies of the letter to the press, declaring that it had been delivered at his “church office” by the post office.

The DUP leader asked: “Is this Ulster money that is being paid out to the Garda, and is it the first instalment from the Secretariat to Dublin?”

For its part, the Department of Foreign Affairs explained that the unnamed “civil servant” was involved in travelling to the North and had wished to thank the Garda for protecting his home outside Dublin. Mr Lillis voiced concerns to the press that the letter had been improperly removed from the post.

Responding to the controversy, head of the NIO Robert Andrew informed Mr Hewitt on February 13th, 1987, that action was needed on three points. He advocated a “robust” reply to Paisley rejecting his allegations about the British taxpayer as “absurd”. He believed the work was that of a “pro-Unionist postal worker”. And finally, he was critical of the Irish official: “For Mr Lillis to have given his address [to the Garda Benevolent Society] as ‘Anglo-Irish Secretariat, Belfast’ (as he appears to have done) is a breach of security and a piece of political ineptitude which we would not have expected from him.”

Another official, RB Spence, reported on March 22nd, 1987 that the Northern Ireland Postal Board had consulted the DPP about the possibility of prosecuting Dr Paisley for “tampering with the mail” but had decided that it was not in the public interest.

Spence went on: “We are concerned that a decision to prosecute Dr Paisley would give him publicity which he would be sure to exploit.”