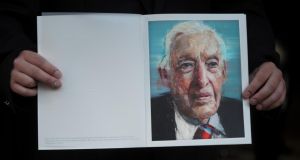 An attendee holds the order of service which features a portrait of the late Ian Paisley as guests arrive for thehis memorial service at the Ulster Hall in Belfast. Photograph: Charles McQuillan/Getty Images 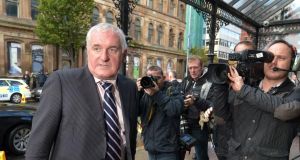 More than 800 people attended a memorial service for the late DUP leader and first minister Ian Paisley in the Ulster Hall in Belfast this afternoon.

The memorial service was designed to allow a public commemoration of Dr Paisley who, from the 1950s and through the decades, was a controversial religious and political figure.

There was a cross-community presence at the service and among those in the hall were First Minister Peter Robinson and his deputy Martin McGuinness. Also present were the former Fianna Fáil taoiseach Bertie Ahern, who became friendly with Dr Paisley and helped persuade him to share power with Sinn Féin in 2007.

Dr Paisley was a noted firebrand who was deeply antagonistic to nationalism and Catholicism, but it was a sign of how he changed in later years that among the invited guests was the grandson of Eamon De Valera, Eamon Ó Cuív, who attended with fellow former Fianna Fáil minister Mary Hanafin.

There were a number of Dr Paisley’s former DUP colleagues present as well such as social development Minister Mervyn Story, who is the current Assembly member for North Antrim, where Dr Paisley served both as an MP and MLA.

What was more notable in relation to his old party were the number of DUP absentees. They included MPs Nigel Dodds, Sammy Wilson and Jeffrey Donaldson. This appeared to reflect how Dr Paisley believed that Mr Robinson and other senior figures in the party had acted to force him prematurely from the posts of DUP leader and first minister.

In the service itself, the focus was on his legacy as a preacher man more than as a politician. It was an also occasion for his friends and for his family, his five children - Ian junior and his twin brother, the Rev Kyle Paisley, and daughters, Rhonda, Sharon and Cherith - and his wife Baroness Eileen Paisley.

Baroness Paisley told the congregation how 64 years ago in the summer of 1950 her and her husband met and fell in love - “a love that was deep and strong, and that increased throughout the 58 years of our marriage”.

“Our marriage was not a dictatorship but a partnership, in which each other’s viewpoint was respected,” she said. “I believe that respect and patience, together with a good sense of humour, are vital ingredients of a successful marriage.

“Ian was often referred to as ‘The Big Man’, and he was certainly that. He was a big man with a big heart,” added Baroness Paisley.

“Ian was one of the happiest men on earth,” she said. “He was happy in his pulpit, in his incredible zest for life, in the three parliaments in which he served, and he rejoiced in the help he could give through these offices to many afflicted and persecuted people across the world, securing freedom for quite a number.”

Free Presbyterian Minister, the Rev David McIlveen, a friend of Dr Paisley, conducted the service. “Dr Paisley’s life has cast an influential shadow over at least three generations: as a faithful preacher of God’s word, as a people’s politician and as a distinguished leader in church and state,” he said.

Ian Paisley junior, who succeededhis father as MP for North Antrim said his family knew he was a “good man”.

“Dad was a politician with a servant’s heart,” added Mr Paisley. “Many of you in this hall today will have heard Dad’s voice echo off these walls in gospel campaigns or in political rallies. We remember with joy those bold proclamations. We remember those utterances and are forever thankful that he did speak out for the gospel and he speak up for his country.

“He was inspirational, he was steadfast, he was consistent,” said Mr Paisley, before thanking all the people who had sent messages of condolence to the Paisley family.

Rev Kyle Paisley said his father had an “abundant life” which didn’t make him dull - “it made him shine”.

He said Dr Paisley deplored what he called dead orthodoxy. “My father could never understand half-heartedness in spiritual things, coldness or indifference towards Christ . In fact, he used to say of those were inclined that way, ‘you see those people, they have only enough religion to make them miserable’.”

Rev Paisley also recalled that in July 1981 he travelled with his father to the BBC in Belfast where he was due for an interview. “During our time there, his police driver had the opportunity to change from using his vehicle to travelling home in an armoured car. It was a providential move. For en route home a would-be-assassin made an attempt on his life, narrowly missing the moving target,” he said.

“I think back on that day very often because had the change of vehicle not been made, the longer car would undoubtedly have been struck. Who knows what the outcome would have been?

“But Dad survived and in his final years played a major part in securing an honourable peace for this province. He got to where he was supposed to be because the Good Shepherd went before him. It is the wisest thing, therefore, not to run ahead of Christ but to let Him lead and to trust each day to Him.”

The memorial service concluded with a minute’s silence, the brief broadcasting of Dr Paisley’s voice and then the playing of his favourite hymn, Amazing Grace.