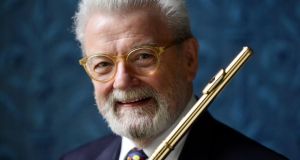 Ian Paisley snr’s family has sought legal advice after Sir James Galway suggested the late former first minister was indirectly responsible for some of the killings during the conflict in the North.

The world-renowned classical flautist told BBC Radio Ulster in an interview on Thursday, which was broadcast on Friday, he “never admired” the former DUP leader and founder of the Free Presbyterian Church, who died in September 2014.

“I think he was on paper a man of God but in reality I don’t think he was,” he said. “I mean how could you justify setting one side against the other?”

During a wide ranging interview with The Nolan Show the 75-year-old, originally from north Belfast but now living in Switzerland, said:

“Let’s talk about Ian Paisley. Now, he was a religious leader. How many people do you think he was responsible for killing indirectly by planting the thoughts of violence and no surrender in the heads of people who had no more sense?”

When asked if he believed Rev Paisley was responsible for some deaths he said: “Well, I’m sure he was because he wasn’t exactly preaching let’s all live together, was he?”

When The Irish Times contacted the Paisley family for their response Ian Paisley jnr explained legal advice was being taken.

“This is with the solicitor,” they said. “I can’t talk about it.”

Sir James was speaking to Radio Ulster ahead of a BBC Music Day performance at Crumlin Road Gaol in Belfast on Friday evening.

He believes the education system in Northern Ireland needs to change so children grow up together and he also suggested Britain’s historic role in Ireland was immoral.

“Well, let me put this to you – would you not think that 800 years ago what the British did was immoral and kept doing it and it is still immoral?” He talked about his Irish identity and how he felt brainwashed by Presbyterianism when growing up in Belfast.

“I would like Ireland to be Ireland. People ask me where do you come from and I say Ireland.

He explained he does not consider himself to be Northern Irish and on how he answers questions from people about accepting a knighthood from Queen Elizabeth in 2001, he added:

“They say, ‘well how do you become a Sir?’ I say, ‘because I come from the British occupied part of Ireland’.

“Then when I grew up we grew up as Protestants and we were brainwashed to the Protestant ethic, and to their way of thinking. For example, we knew all the sights of London, Trafalgar Square, Buckingham Palace and all that but we didn’t know Stormont.”

Last year, Anna Lo MLA of the cross-community Alliance Party was praised and criticised in equal measure after she declared her preference for a united Ireland.

Ms Lo described herself as “anti-colonial” and called the partition of Ireland “artificial”.

Mr Wilson said: “During the interview with Stephen Nolan, Sir James Galway indicated that he doesn’t take much interest in politics and perhaps he should have kept it that way.

“I have always admired Sir James’s work but some of his comments were offensive, inaccurate and downright disgraceful.

“Everyone is entitled to develop their unique political viewpoint but if they express that view then they should also be prepared to defend it.

“For Sir James to express his pro-republican viewpoint, criticise Northern Ireland being part of the United Kingdom but then accept a knighthood from our monarch is hypocritical. It is the typical hallmark of anti-British social climber who cannot resist our British honours system. If Sir James’s views are so dearly held then he should probably consider handing back the knighthood.

“The Paisley family have requested that we do not comment on Sir James’s remarks about Dr Paisley because of pending legal action. We respect this request however we will always defend Dr Paisley’s record as a leader of unionism.

“Sir James’s interview will have discredited him with many admirers. His incoherent claims will be viewed as the comments of someone who is out of touch with reality in Northern Ireland.

“I am a proud unionist. I am delighted that a growing majority of people in Northern Ireland recognise that our future is best served as part of the United Kingdom.”